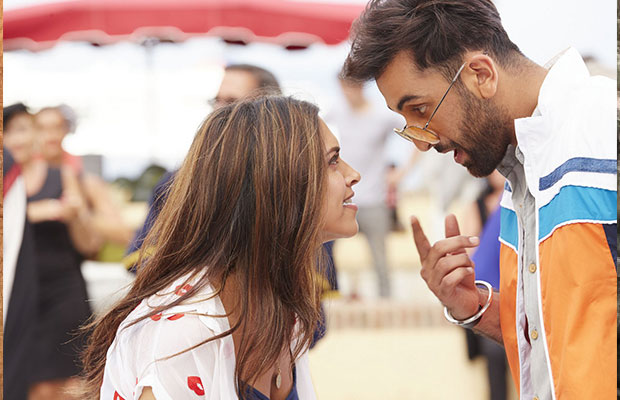 [tps_footer]He hears her swearing in Hindi on the French island of Corsica. She finds her knight in shining armour in him. They promise to spend a week together on the idyllic isle, immortalized by the ‘Asterix in Corsica’ comic book, but never tell each other the truth. Her identity is ‘Mona Darling’, his ‘Don’. The week ends. They part after an impulsive romantic moment of weakness. This week of play-acting is highly contrived and incomprehensible, and becomes a point of disconnect. The first half hour plays out like a long showcase for Corsica as a destination with the high point being A R Rahman’s ‘Matargashti’ (the only song from the soundtrack that sticks).

Along with the duo, the audience too knows very little about this pair, except that through hazy flashbacks we have seen the childhood of a boy in Shimla who is terrible at Maths but loves to hear stories. He saves rupees and coins to pay an old man under a tree who relates fables for a fee.

Years pass. We see that she has held on to a dream and a memory of her summer fling. We see nothing of him, until she bumps into him one day at a coffee shop. Ved meets Tara. Reality, we see, is far less interesting than fiction. Tara is not as enamoured by the real Ved, a product manager, as she is with the idea of him — an idea that she says is enough to satisfy her.

However surreal writer-director Imtiaz Ali’s early narrative style is, he does eventually conform to a Bollywood narrative and a theme he has revisited – lovers who must part before reuniting and a search for identity. Tara awakens the suppressed Ved and gives him the courage to take chances. Ali also explores relevant themes of conformity, parental pressure, following ones dream and getting off the treadmill of a perceivably ‘normal’ life.

Ali employs another device – of showing a variety of storytelling techniques – theatre, oral, musical, comic book, novels etc. But the layering and messages are not subliminal – they are as overt as Tara reading Joseph Heller’s seminal novel ‘Catch 22’ while seeking out a lost love. There is also the basic question of why Tara waits as long as she does to tell Ved how she really feels about him.

Tamasha is a fabulous showcase of Ranbir Kapoor’s range and control over his craft. He’s charming, real, raw and vulnerable. His chemistry with Deepika Padukone adds energy to the somewhat choppy screenplay and narrative. Padukone is radiant and brings gravitas to her role as a modern, independent and self-assured woman even though it would have been nice to know more about Tara’s journey.

Watching Ranbir-Deepika on screen together is value for money itself.