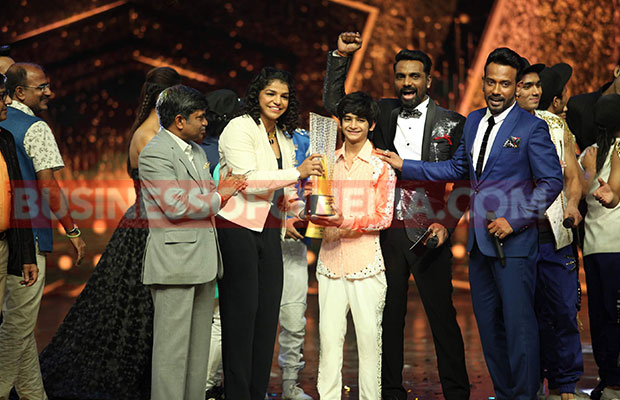 After 15 weeks of hard work, rehearsal and innumerable ‘DOUBLE PLUS’ performances, India has voted and chosen the second winner of Dance Plus! In the wee hours of Sunday evening Tanay Malhara was declared the winner of Dance Plus. Remo D’Souza, Super Judge on the show along with captains Shakti Mohan, Dharmesh Yelande and Punit J Pathak celebrated the achievement of announcing the second dancing icon of the nation.

Tanay Malhara who is the youngest 14 year old dance icon of the nation takes home The Dance + Trophy, twenty five lakhs and a brand new Hyundi Grande. The other top 3 contestants on Dance + along with Tanay were Wild Rippers crew, Piyush Bhagat & Sushant Khatri.

A never seen before dance styles, a never seen before unique talent on board and a never seen before FINALE, most popular dance reality show Dance + broke all records in the nation with its second season. From introducing international dance styles to having Bollywood celebrities like Hrithik Roshan, Prabhu Deva, Varun Dhawan etc., from contestants giving ‘+’ performances week on week basis to making the entire nation sit up & notice, Dance + 2 has reached the top notch of complete entertainment.

As promised, the show gave thrilling never seen before 2 hours nonstop Dance marathon for its finale. And to add to the flavor of finale, Dance + season 2 had Bollywood heartthrob Ranbir Kapoor dancing to the tunes of contestants and super judge Remo D’Souza. A never seen before finale also had Olympian champion who made India proud at Rio Olympics, Sakshi Malik. And lastly to top it all, national award winner and Bollywood’s favorite choreographer, super judge Remo D’Souza gave an enthralling performance on all the songs he has choreographed so far in his career.

“It was a delight to be a part of this show. Remo Sir and STAR Plus didn’t just give me a platform they gave me the opportunity to go out in the real world and live the life I didn’t even know. Winning this show was a very big surprise. I didn’t know so many people out there have been supporting me. Most importantly, Dharmesh Sir has supported me throughout and I dedicate my win to him. Also, Shakti Ma’am & Punit Sir gave constant motivation to me and the shining moment was when they all said, ‘being a 14 year old boy, deserve to be the next dance icon of the nation.’ Entire team behind dance Plus has given me their unreserved support through their comments that only inspired me to work harder and win the love of so many fans.” Tanay Malhara said.

Super judge Remo Dsouza who is very proud of the winner said, “Tanay is India’s second dancing icon. I am so happy that India has made the right choice by making the most deserving contestant win. From now on, Tanay will embark on a dance journey and inspire the nation that age and size doesn’t matter if you’re just born to dance and have sheer will to continue that. I would like to thank all the audiences for voting and making the second season of the show a huge success.”

Taking the title home for second consecutive time, captain Dharmesh said, “I’m overwhelmed with the response from audiences. They truly have chosen the best one. Tanay is by far my favourite student. Tanay and I had put in a lot of efforts in each of his acts which got him ‘Double plus’ performances week on week basis. I thank all fans and audiences who voted for Tanay and my team.”