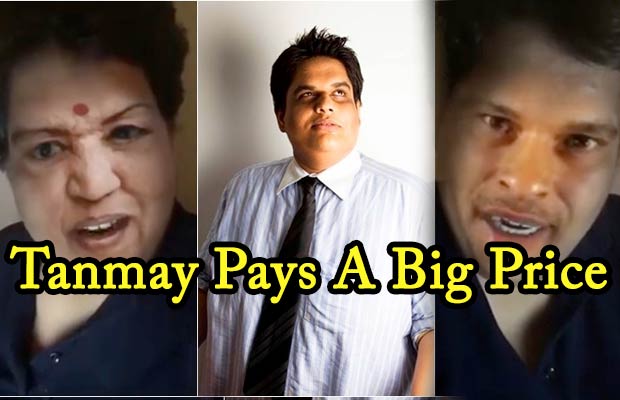 [tps_footer]Bollywood was divided into two camps to over Tanmay Bhat‘s annoying and insulting Snapchat video where he was busy mocking the two great achievers of our country, Nightingale of India Lata Mangeshkar and Master Blaster Sachin Tendulkar. Bollywood’s young actresses like Alia Bhatt, Sonam Kapoor has been supportive towards Tanmay‘s act and called it humour but veterans of our industry like Salim Khan, Javed Akhtar, Shatrughan Sinha have shown their anger towards Tanmay‘s viral video. But, now his so-called funny act has made him pay a big price because his track from the movie Shorgul starring Jimmy Sheirgill, Ashutosh Rana has been deleted and we won’t get to hear the song Pehle Aap is written by Tanmay and sung by Daler Mehndi.

Even Tanmay Bhat won’t have imagined this kind of response for his act of mocking Lata Mangeshkar and Sachin Tendulkar. But, the co-producer Aman Singh has confirmed the news of deleting Tanmay‘s song from the movie because of the negative publicity Tanmay has garnered and it has hurt a lot of people’s sentiments right from the biggies of Bollywood to all the fans and admirers of Lata Mangeshkar and Sachin Tendulkar worldwide. Finally, we hope people will be very careful with their funny acts and use sensible words instead of insulting others and calling it a good sense of humour. Shorgul makers were excited about Tanmay‘s song Pehle Aap but the recent controversy surrounding Tanmay has made them take this decision together of scrapping his song from the movie’s album.

We hope that in future things will work out well for Tanmay and he will be sensitive and sensible enough with his scripts and funny acts or else it will certainly ruin his career, the negative impact of his not-so-funny act is already damaging his public image and now work too.[/tps_footer]