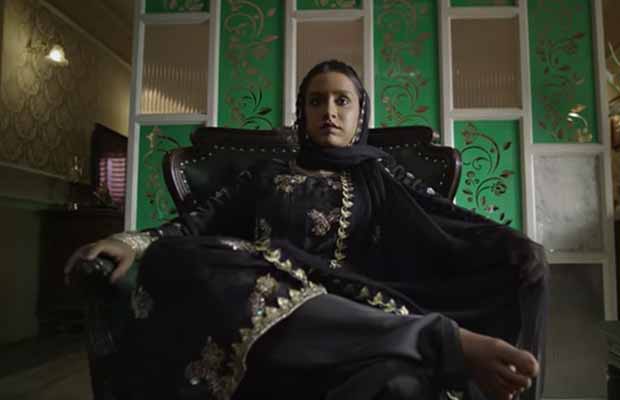 Shraddha Kapoor nails it as a female gangster in the teaser of Haseena Parker.

It is the Bollywood actress Shraddha Kapoor’s first biopic in which she will be seen playing the role of gangster Dawood Ibrahim’s sister Haseena. Earlier, the actress had released the teaser poster which had her face hid under a burqa, revealing just her kohled-intense eyes.

And now the teaser of the film is finally out and we must say that Shraddha Kapoor has totally nailed it in the role of the female gangster. Although, we get to see her only towards the end of the teaser, the glimpses that are there throughout give us an idea about how the actress is going to appear in the film.

Also the line “28 legal cases filed, but appeared in the court only once” is very interesting, that appeared on the poster and is a part of the teaser as well.

Shraddha’s role in the film sees her in two different styles – one in which she plays the younger version of Haseena and is trying to deal with her world and the other one is the gangster Haseena who is all set to rule her world.

The one-minute long teaser also gives us a glimpse of the actress’ brother, Siddhanth Kapoor, who is looking equally intense.

‘Haseena Parker’ was earlier scheduled to release on July 14, making a clash with Ranbir Kapoor’s ‘Jagga Jasoos.’ Later, it got shifted to July 28, again clashing with Anees Bazmee’s ‘Mubarakan,’ Madhur Bhandarkar’s ‘Indu Sarkar’ and Tigmanshu Dhulia’s ‘Raagdesh.’ But now the film has been pushed to August 18, making a solo release.