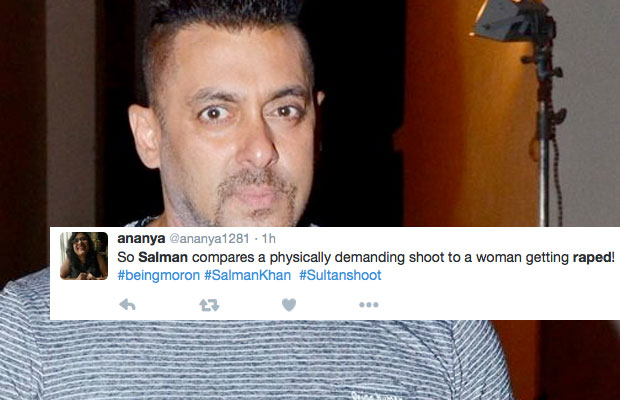 [tps_footer]It is about to release Sultan, and Salman Khan is pretty excited about it. But this excitement became a bone of contention as he mouthed something totally disrespectable. In a recent interview with a leading daily, Salman compared himself to a ‘raped woman’, his explanation included all the turmoil and bashing that the movie has. Now, that was definitely the last straw he needed, as the feminists are going nuts over this comment which is definitely dis-respectable to the entire women clan. He definitely blew up the hornbill’s nest this time.

Salman reportedly said, “While shooting, during those six hours, there’d be so much of lifting and thrusting on the ground involved. That was tough for me because if I was lifting, I’d have to lift the same 120-kilo guy 10 times for 10 different angles. And likewise, get thrown that many times on the ground. This act is not repeated that many times in the real fights in the ring. When I used to walk out of the ring, after the shoot, I used to feel like a raped woman. I couldn’t walk straight. I would eat and then, head right back to training. That couldn’t stop.”

Ouch! Now that is so not cool. The twitteratis are creating havoc because Salman did enrage a lot of women and well this is a sensitive topic and some are looking at it as a form of mockery which is definitely not to taken lightly. We definitely are in an awkward position. As much as we love our bhai, this statement is definitely wrong!