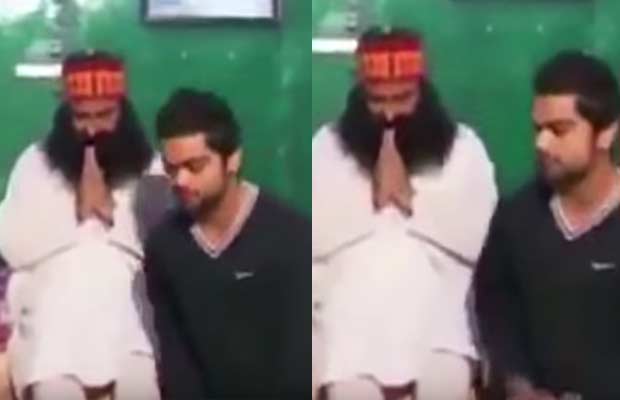 A video of Virat Kohli bowing to self-made godman Gurmeet Ram Rahim Singh is going viral on the Internet for all the wrong reasons. Along with Virat Kohli, also seen taking blessings are Ashish Nehra, former Indian wicketkeeper Vijay Dahiya and current India opener Shikhar Dhawan. The old video is doing rounds on social media ever since Gurmeet Ram Rahim Singh was convicted on charges of rape by a CBI court in Panchkula.

This video is a proof that Virat Kohli was also one of the followers of a man, who has been now convicted in the rape case. Ram Rahim had earlier claimed to have trained Virat Kohli. He had said, “He (Virat Kohli) was unable to convert good starts into big scores. I suggested him to practice hard and continue learning”.

During the same interview, he had also said that it is because of him that Virat Kohli is doing well in his career. “The youngsters whom I have coached are doing well for the nation today. There is boxer Vijender Singh who is winning so many medal for the country. Then there is Virat Kohli. I have this video of him with me where he came to me to learn so many things and now he one of the best in the world,” Gurmeet Ram Rahim Singh had said during an interview long back.

Meanwhile, after he was convicted of rape, Ram Rahim’s followers on Friday went berserk outside the court in Panchkula. Reportedly, 38 people have died in the violence and nearly 200 people were injured during the riot after the self-proclaimed godman was taken into the custody.