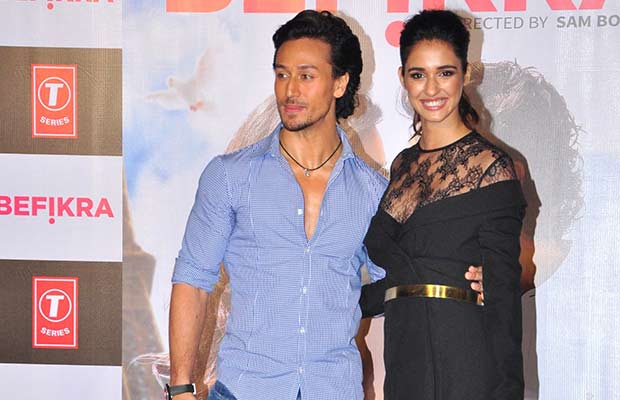 [tps_footer]Bollywood actor Tiger Shroff’s chemistry with alleged girlfriend Disha Patani has grabbed all the eyeballs in their recently released single music video ‘Befikra’. The two stars have left everyone mesmerized with their adorable chemistry in foot-tapping song Befikra. Tiger has always grabbed all the eyeballs on his secret relationship with Disha and today at the launch of the music video; the actor was triggered with questions regarding his relationship status.

When asked about the same, he said, “We are very good friends. Main Disha se bahot pyaar karta hoon…as a friend. We go to movies with friends. We go for dinners and lunches too. I guess that is normal.”

Reacting on the same, Disha said, “Yeah we like spending time together. We go to dance rehearsals and gym together. We both are foodies.”

Well, we say nice way to keep your relationship under wraps but time will tell better! Well, Disha was in all praise for Tiger at the launch event. The diva said, “When Tiger dances you can’t see anyone else. I hope I look decent dancing with Tiger & not funny.”

Earlier this month, the two were spotted outside a restaurant in Mumbai. Though the two were together for dinner, they left separately in order to avoid being clicked by the paparazzi. The very charming Tiger Shroff first stepped out of the restaurant and soon moved away in his car, while Disha stepped a few minutes later. Surprisingly, Disha left in an auto rickshaw while Tiger left in his car.

On the work front, Disha is all set to make her Bollywood debut in Neeraj Pandey‘s ‘M S Dhoni: The Untold Story’ while Tiger Shroff has geared up for his next upcoming film, ‘A FlyingJatt‘ opposite Jacqueline Fernandez.