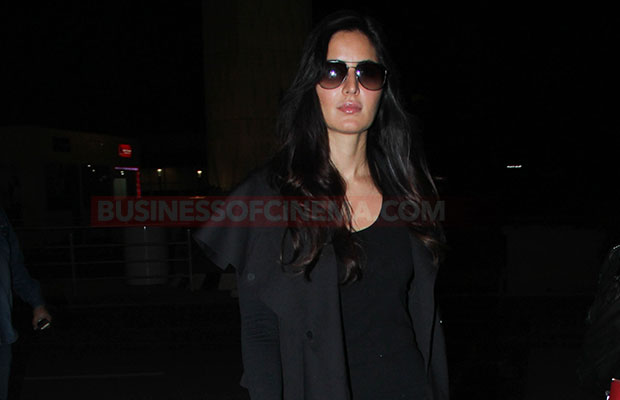 Salman Khan and Katrina Kaif were spotted at the airport leaving for Tiger Zinda Hai shooting.

Salman Khan and Katrina Kaif have left for Austria for shooting of Tiger Zinda Hai. The movie is directed by Ali Abbas Zafar and is the sequel to the 2012 movie Ek Tha Tiger. Kabir Khan directed the first part of the film, but now Sultan’s director is helming the sequel.

The duo were clicked at the airport looking cool. Seems they had colour co-ordinated their outfits, as both were seen in black. Katrina donned an all black ensemble with high boots and a jacket. Salman Khan looked simple in an all black look.

The first schedule was shot in Marrakesh, Morocco.

We had exclusively revealed that Salman Khan has already lost 17 kilos. He has been on a strict workout and diet regimen.

Salman Khan and Katrina Kaif starrer upcoming film Tiger Zinda Hai also has a Hollywood connection to the film. Director Ali Abbas Zafar has roped in Hollywood’s award-winning action director Tom Sturthers. He is appointed to choreograph the stunt sequences in the film.

Katrina Kaif had earlier revealed that the plot of the film will move on exactly from where it left in the prequel. She had said, “The film is set in today’s times. It’s set in one time period. There’s no aage-peeche at all. It’s a sequel in the correct sense of the term. It begins exactly from where we left off in Ek Tha Tiger.” So, it is obvious that Baar Baar Dekho actress and Bhai will romance on screen. She will be the gorgeous villain to Salman’s RAW agent!!

The film is said to be the story of an Indian spy (RAW) code-named Tiger. He falls in love with a Pakistani spy agent during an investigation.

Paresh Rawal will also be playing a special role in the film.[/tps_footer]