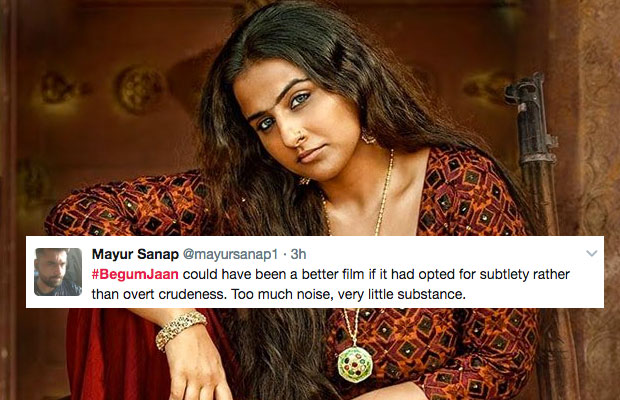 Vidya Balan starrer Begum Jaan has finally released today at the Box Office. The trailer of the multi-starrer film had received an immense response and the same was expected frrom the film post-release. Begum Jaan, is an adaption of Bengali version, Rajkahini, managed to create the much-needed buzz before the release. Begum Jaan is a multi-starrer film but we also know, Vidya Balan is capable of delivering a hit film on her shoulder. Her past records are a proof.

With a strong storyline, the curiosity for the film among the audience was already high, which was a good sign by all means. Moreover, the stars of the film promoted their movie in all corners, which has increased its recall value amongst the movie goers.

Well, the audience had high hopes from the film and going by the first tweet review of the audience, the film has received mixed reviews.

The movie is assumed to attract a good crowd at the screens. The film has finally entered its first day at the theaters and here is what audience have to say.

All hail down to the amazing duo of @GAUAHAR_KHAN and VidyaB! You guys were the reason i’ve watched the movie! I just loved it. #BegumJaan

Saw Begum Jaan, a hard hitting movie that sears your soul! Amazing performances by all, with #VidyaBalan stealing the show!#BegumJaan #movie

#BegumJaan. Interesting premise. So much promise. But…

Talking about the film, Begum Jaan is written and directed by National Film Award-winning director Srijit Mukherji and produced by Mukesh Bhatt, Vishesh Bhatt, and Play Entertainment. The film is based on the backdrop of the year 1947. Begum Janna is the story of eleven women who refuse to part ways with their brothel and each other during the partition between India and Pakistan. The film also stars Chunkey Pandey and Naseeruddin Shah in the lead roles.