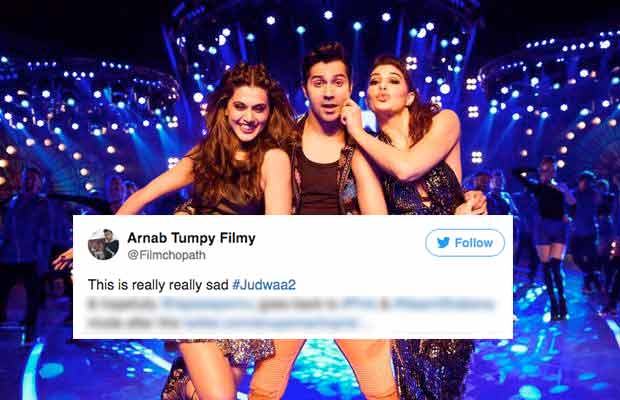 Judwaa 2, starring Varun Dhawan, Taapsee Pannu, and Jacqueline Fernandez, has finally released today at the Box Office. Before the release, the makers of the film created an aggressive promotional strategy for the film to hype up the buzz. Director David Dhawan is set to bring his double dose of comedy with Judwaa 2 once again. But could it really live up to audience expectations?

Also, the chemistry between Jacqueline- Varun, and Taapsee –Varun created much hype. Another level of excitement is Salman Khan’s cameo in the film.

The launch of chartbuster tracks Tan Tana Tan and Oonchi Hai Building has created a lot of publicity around the film. It has only helped out to increase the recall value among the audience.

Are you planning to watch Judwaa 2 this weekend? Check out audience review below and decide if its worth watching:

Interval and nothing except a 5 min hillarious scene #Judwaa2

on one hand we have newton.. nominated for oscars,then we have the crap #Judwaa2 .
stop ruining the classics at least.

#Judwaa2 Buy the DVD of Salman Khan's 1997 film JUDWAA instead and watch it. You will enjoy it at least 10 times better than this.

I don't know what's wrong with Hindi film industry. Times have changed and also the audiences, the film makers need to understand #Judwaa2

While #Judwaa was just about "good", #Judwaa2 lags behind majorly because of the not so efficient supporting cast!

Just Came Home After Watching #Judwaa2 ???
Superrbbbb Movie ?
Superbb songs??
Amazing Acting by all..
So Entertaining ?
A Must Watch film ?

#Judwaa2 Review @taapsee and @Asli_Jacqueline delivered Clap worthy performances.
Both of them are Superb in their Role.
2/4 cont'd

#Judwaa2 is a decent entertainer wherein @Varun_dvn shines as Raja & Prem, @Asli_Jacqueline looks stunning, and others fail to leave a mark

This is really really sad #Judwaa2
& hopefully @tapseepannu goes back to #Pink & #NaamShabana mode after this https://t.co/33rhZLq1Du