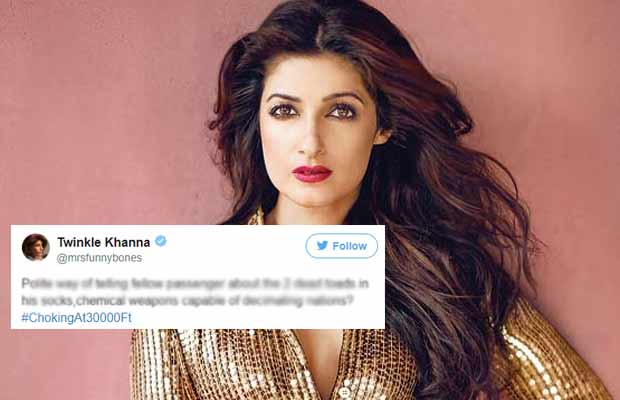 The Bollywood actress and author Twinkle Khanna was travelling to Mumbai when the smelly event took place.

Twinkle Khanna, a Bollywood actress, producer and entrepreneur is known for her funny bone. She is not only an author but takes part actively in social causes.

Her book ‘Mrs Funny Bones’ and her recent book ‘The Legend Of Lakshmi Prasad’ has won her praise for her writing style and sense of humour.

The 43-year old writer holds a column in a leading newspaper under the name ‘Mrs. Funny Bones’ and takes on trending issues by spinning it into a humorous tale or experience for the readers.

She went on to tweet about her smelly adventure while on an 8-hour flight back to hometown Mumbai after a long vacation with sister Rinke in Austria.

The actress was seated next to a passenger who apparently had really smelly feet and was causing an inconvenience to her. While the actress didn’t want to call him out directly, she took to twitter to ask for some advice post flight. Many came to her rescue by giving her silly ideas and asking her to be honest about it.

She tweeted about her experience with the #ChokingAt30000Ft and asking for some help, “Polite way of telling fellow passenger about the 2 dead toads in his socks, chemical weapons capable of decimating nations? #ChokingAt30000Ft”

Polite way of telling fellow passenger about the 2 dead toads in his socks,chemical weapons capable of decimating nations? #ChokingAt30000Ft

To which other friends and celebrities gave her advice on her struggles and stated
she had nowhere to run either. The actor quipped that it was impossible to run on
an 8-hours flight.

chemical warfare in the air? why not be direct? ?

Excuse me, is there something dead under your feet?

The actress then was at relief when the situation was handled expertly when she told the air hostess her problem.

I did and she sniffed around, sympathetically nodded and when he fell asleep she surreptitiously sprayed his smelly feet with perfume! https://t.co/opfvJPKSxG

Some even asked for special techniques she was using to save herself from the bad body odour.

What worked for you? In a pool cab ride, have a man expose sweaty armpit & manspread to occupy the entire back seat-bad BO. HELP #CabDiaries

While fans suggested her to ask for his twitter handle and clear out this mess or just ‘man up’ and tell him!

Hope that he is on twitter and following you ?

There is no polite way out @mrsfunnybones – just say it

Twinkle Khanna will be playing producer for her next movie ‘Padman’ starring her husband Bollywood actor Akshay Kumar with actresses and models Radhika Apte and Sonam Kapoor.

It was only last month when the actress shared a cute picture of veteran actress and mother Dimple Kapadia and her 4-year-old daughter, Nitara. She captioned the image on her twitter saying, “What generation gap? 56 years apart but both the baby and her Nani get ready to go shopping with purring feet #AgelessGoals”

What generation gap? 56 years apart but both the baby and her Nani get ready to go shopping with purring feet #AgelessGoals pic.twitter.com/JOJoK5OsE2

Here’s hoping the witty actress keeps us entertained with such stories and experiences in her life.