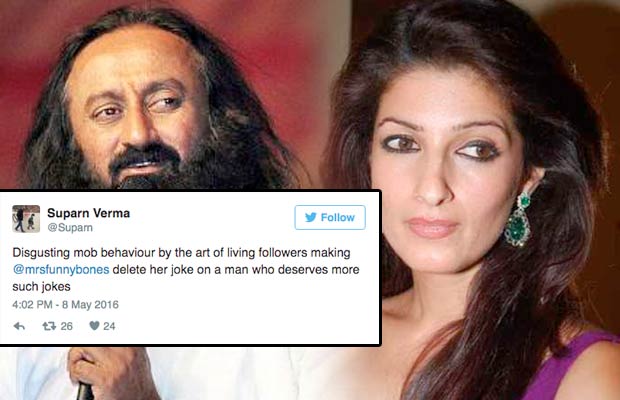 [tps_footer]Earlier this month, spiritual Guru Sri Sri Ravi Shankar was at the receiving end of heavy criticism on social media for his remark on activist Malala Yousafzai and her Nobel Prize. He was quoted saying, “Nowadays there is no value to the Nobel prize. When you award it to a 16-year-old girl who hasn’t done anything, what value is left? It has become a political joke.” This comment of the spiritual guru on the Pakistani teen received a lot of flak and he was the topic of condemnation for many days to follow.

One of the many famous individuals to voice their opinion on Sri Sri’s remark was the witty and politically aware Twinkle Khanna. The leggy lady who is also the wife of ‘Airlift’ actor Akshay Kumar took to Twitter to post a rather tongue-in-cheek tweet –

Within a time span of a mere few hours, the backlash and trolling started. As was expected, the otherwise ‘peaceful’ followers of Sri Sri Ravishankar started spewing hateful, trolling and downright threatening tweets to the Kumar wife. This was followed by Khanna taking down the ‘offensive’ tweet and offering something akin to a reply tweet that read –

“Didn’t mean to hurt anyone’s feelings was meant to be a joke and am old enough to accept an error of judgement on my part. Art of living teacher practising Art of intimidation? Didn’t like my joke diss me-drag my husband,boycott etc.”

While some of the trolls were pacified by this, many others were not and they continued to keep up the stream of hate coming her way and asking supporters to boycott Khanna’s husband’s next release – Housefull 3. Twinkle Khanna is the author of the book ‘Mrs. Funnybones’ and is active through her blog.