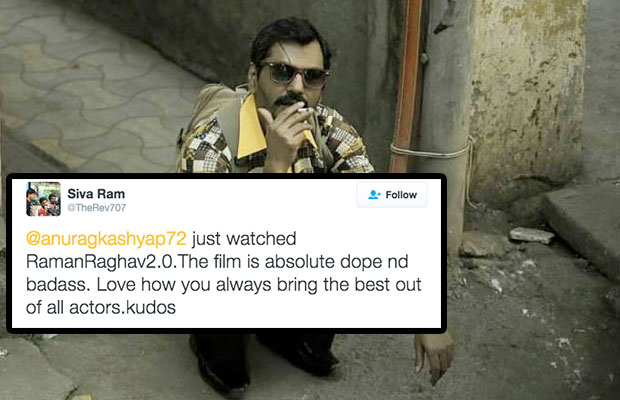 [tps_footer]Nawazuddin Siddiqui is one of the most versatile actors of the industry. The mind blowing actor who is known to give credible performances is now flaunting his acting skills in the film ‘Raman Raghav 2.0′. The thriller movie is based on real life incidences. Nawazuddin is essaying the role of Raman Raghav who was a killer in the 60s era.

The film already generated loads of curiosity amongst the masses for its subject. The movie is directed by Anurag Kashyap and also stars actors Vicky Kaushal and Sobhita Dhulipala. The film is an edge of the seat thriller which will shock you by all means.

‘Raman Raghav 2.0’ has finally released and here is what the movie goers say about the film

#RamanRaghav2 is strangely enjoyable. The hunter and the hunted reveals a deliciously dark turn at the end. Great watch! @anuragkashyap72

Only Anurag Kashyap could have made this film. Full on Qatl-e-Aam macha diya. “The Sister” chapter was something else. #RamanRaghav

@Nawazuddin_S  You took it to a whole new level, @vickykaushal09 the transition you portrayed left me spellbound!! #RamanRaghav #MustWatch

@anuragkashyap72 just watched RamanRaghav2.0.The film is absolute dope nd badass. Love how you always bring the best out of all actors.kudos

#RamanRaghav2.0 Super,super movie! Had tons of fun watching this one.. Take a bow @anuragkashyap72 sir!

#RamanRaghav2.0 is not as beautiful as #Ugly but as ugly as #BombayVelvet. Another Kashyap’s pointless dark misfire except brilliant score

#RamanRaghav2.0 is disturbing, yet delightful. Bravura performances, gritty storytelling make this worth your money. @anuragkashyap72 Genius