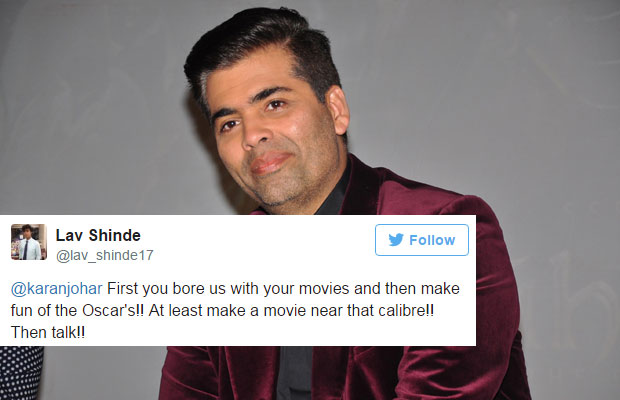 A huge blunder on Oscar 2017 stage had caught everyone’s eyes when Warren Beatty announced La La Land as the winner in the Best Film category instead of Moonlight. After the La La Land team reached the stage to accept the award, it was announced that it happened to be a big mistake as not La La Land but Moonlight is the winner. Many took to twitter to share their views on the awful incident and among them was also Bollywood filmmaker Karan Johar.

Karan Johar could not stop himself to twitter to tweet about the blunder. He wrote, “First you bore us with a bland and boring ceremony…then you mess up the most important modality!!! #oscar.”

And within minutes, Karan Johar was forced to delete it and you won’t believe why.  Twitterati lashed out at him and started taking a dig at his movies and also Bollywood award shows. Karan again tweeted, “That was the most ridiculous and hysterical goof up in the history of the academy awards!!!!! #oscarbooboo”

That was the most ridiculous and hysterical goof up in the history of the academy awards!!!!! #oscarbooboo

And in no time, he was trolled like never before the filmmaker had no option but to not respond any tweet. Check out below how twitterati trolled him:

@karanjohar First you bore us with your movies and then make fun of the Oscar’s!! At least make a movie near that calibre!! Then talk!!

@karanjohar well nothing more fake than Bollywood awards including Filmfare. Work on it

@karanjohar look who’s talking about awards and awards ceremonies?? the man/woman who irritates Indian audience with his lame jokes..??

@karanjohar because they use scripts in movies and not in awards

@karanjohar …May be He got paid to do that…???may be it was all set …just like Bollywood..just like @akshaykumar don’t get any awards

@karanjohar My thoughts exactly after watching your movie, ridiculous and hysterical.

@karanjohar Ae Dil Hai Muskhil Got Filmfare Nomination . That is Biggest Goof up.

@karanjohar Are you talking about yourself Karan? Direct a movie of that caliber and we’ll talk.