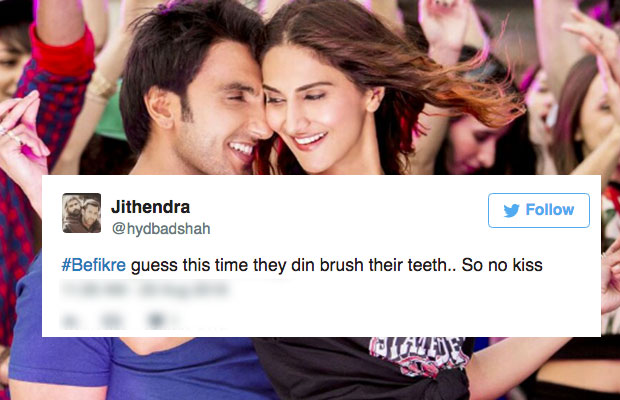 [tps_footer]A new still from Ranveer Singh and Vaani Kapoor’s upcoming film, Befikre is out. Well, unlike all the posters that came out, there’s no kissing business in this still. Ranveer and Vaani look in party and lovely mood together in this crackling new still. This will be director Aditya Chopra’s comeback film after his 2008 hit Rab Ne Bana Di Jodi. Befikre, shot in ravishing locations of Paris, is a modern-age love story. Also, apparently, Ranveer and Vaani might have total 23 kisses in the film. The film will release on December 9, this year.

Well, looking at this ‘no kiss’ still, Twitterattis are quite stumped. They have hilarious reactions on this pic. Here’s how the Twitter world reacted:

They are not kissing in this pic. How do you know if it's from #Befikre ? https://t.co/0aFzfwbUbf

#Befikre New picture release.@RanveerOfficial not kissing @Vaaniofficial for a change. Are you tired of kissing her? pic.twitter.com/Z8X7DCa9FU

#Befikre guess this time they din brush their teeth.. So no kiss

No kiss on posters 😏😏#Befikre …. pic.twitter.com/KOnkjgXyiz