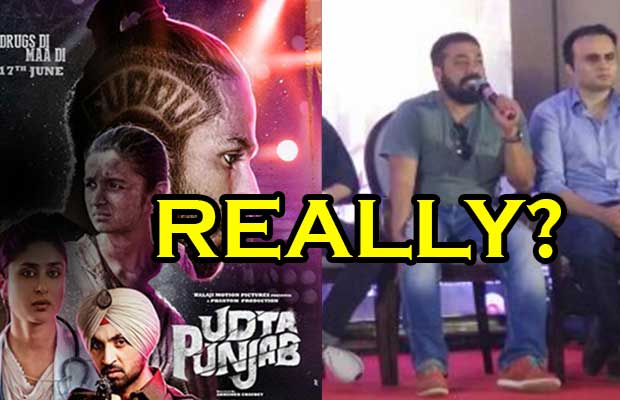 [tps_footer]Since the first trailer of Shahid Kapoor and Alia Bhatt starrer Udta Punjab was released, the film was much in hype for its unique and realistic storyline. While the trailer and performances of the stars were being appreciated, the film landed into a major trouble over censorship controversy. Censor Board chief Pahlaj Nihalani rejected to issue the certificate to the film and had asked to cut the expletives, visuals of drug consumption and many scenes and words from the film.

Not giving up their fight, makers of the film approached Bombay High Court and filed a plea against an order of the Review Committee of the Central Board of Film Certification (CBFC). On Monday evening, High Court released its final decision saying that the film can be released with only one cut. Over High Court’s decision in their favour, the makers of the film held a press conference today in Mumbai.

Producer Anurag Kashyap thanked media and everyone for their endless support. At the press con, the director-producer also said that many doubted their intentions and called it as a publicity stunt. “The battle is far from over. Some people were doubting our intentions, said it was a publicity stunt, we had political affiliations, but we got a lot of support from the industry and media. Have never seen so many people come together, and this helped us putting pressure on CBFC,” said Anurag.[/tps_footer]