It was recently at the prestigious IIFA Awards, where the Bollywood actor Varun Dhawan went on the stage to collect an award. He won the award for the Best Actor in a Comic Role (Male) for the film ‘Dishoom’.

He joined the hosts Saif Ali Khan and Karan Johar on the stage who were in a fun mood. On winning the award, Saif quipped Varun saying, “You are here because of your pappa.”

Varun was no less as he replied saying, ”And you’re here because of your mummy (veteran actress Sharmila Tagore).” While Karan Johar was not going to end it there, he joined the actors and said, ”I am here because of my pappa (late filmmaker Yash Johar).” After that, the trio shouted in unison, ”Nepotism rocks”.

Those who know about the whole Karan – Kangana’s matter over the nepotism issue, will get the hidden pun. It was obviously a dig at the actress Kangana Ranaut.

While it became a news all over, people started criticising all three men, especially Varun, for doing such a thing. The actor has been trolled badly on Twitter and people have said that they expected better from him.

Check out some of the comments made by the Twitter users on Varun and Kangana: 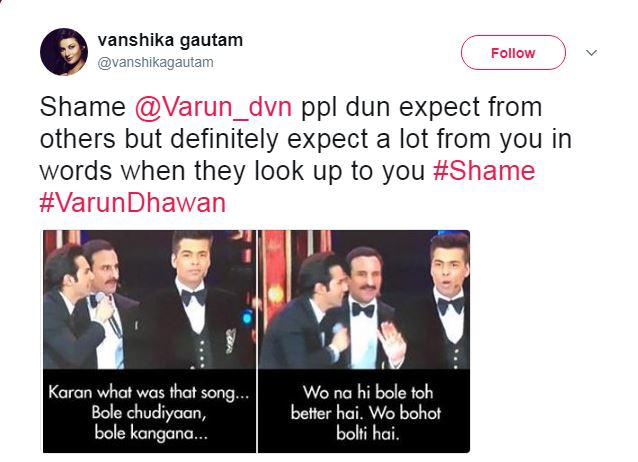 Varun Dhawan is going to be seen in the film ‘Judwaa 2’. The film also stars Taapsee Pannu and Jacqueline Fernandez and is slated to release on September 29, this year.