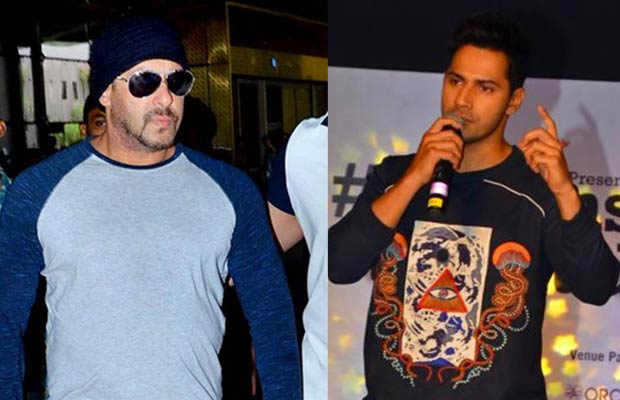 Varun Dhawan reacts when being compared to Salman Khan.

Bollywood’s young star Varun Dhawan is touching new heights with his back to back success and he always goes extra mile for his every film. The actor, who has geared up for the release of his upcoming film Badrinath Ki Dulhania opposite Alia Bhatt, is also all set to step into Salman Khan’s shoes for Judwaa 2.

The dashing actor has had an amazing career so far and is now all set to step into the shoes of Salman Khan for Judwaa sequel. Well, after 20 years, time has come again and this time, Varun Dhawan will be seen in a double role for Judwaa sequel. It won’t be a piece of cake for Varun Dhawan to fit in the character played by Salman Khan in Judwaa but the actor is all set to give his best.

Recently, in an interview with Filmfare, Varun Dhawan was asked if it flatters him when being called as Salman Khan of today’s generation. To which he replied saying, “Honestly, I don’t dwell on it. In fact, this perception came into being when I started off my career. Whatever said, I still have to work hard, I still have to put in efforts. People can say a lot of things, but deep down inside you know what’s true and what’s not. You should not lose focus.”

When further asked what he wants his fans to perceive him as, the handsome hunk reacts saying,  “With love, knowing that this boy is versatile and that he evokes emotions in us. They should want to watch a Varun Dhawan film knowing I would entertain them… whether it’s a thriller, a love story or an action film. They should look at me as a quality entertainer with high standards. I want to play characters that people can relate to and are memorable. Characters played by Amitabh Bachchan sir, Shah Rukh sir, Salman sir… are still remembered. After watching their films, you take that guy home. I’m definitely not there yet. But I won’t lie. I do want to get there for sure.”

During the same interview, Varun Dhawan was also asked to shares his memories he had with Salman Khan. Varun Dhawan, who is very fond of Salman Khan said, “A lot of them. I remember during the screening of Judwaa, I called him ‘uncle’. He said, ‘I’ll rap you if you call me uncle’. (Laughs) Guess what! He’s just sent me a suitcase full of jeans for Raja’s character in Judwaa 2. Bhai is proud of whatever I’ve done. He says I’m a bit too enthusiastic on screen and asks me to calm down. He’s someone I can go to whenever I need any help.”