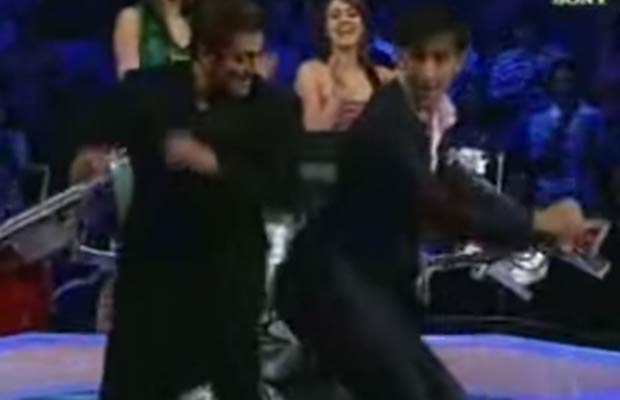 [tps_footer]Time changes and so do people! Bollywood stars are also seen going through such changing equations phase along with the changing time. They have dogged questions, admitted at times, gone through bitter phases in their lives and much more, but their past can never change. Bollywood actors Salman Khan and Ranbir Kapoor who were kind of good friends at a time, now hardly prefer to talk about each other.

It’s known to all that actress Katrina Kaif was in a relationship with Salman Khan before dating Ranbir Kapoor. Things were at the right place before Katrina Kaif and Ranbir Kapoor started dating each other in 2009. The friendship between Salman and Ranbir was way to adorable then. You don’t believe?

We bring a flashback video of them where the two were seen sharing the same stage. In fact, they are also seen dancing and hugging each other like best buddies. Back in 2008, when Ranbir Kapoor and Deepika Padukone’s ‘Bachna Ae Hasten‘ released, the two stars had attended Salman Khan’s reality show ‘Dus Ka Dum‘ for the film’s promotion.

From dancing together to hugging each other, Salman and Ranbir were seen like best buddies at that time. One can see in the video, Salman, who is known for his witty sense of humour and fun loving nature, is seen pulling Ranbir Kapoor’s leg who was dating ex-lover Deepika Padukone at that time.

Well, now the time has changed and so are their relationships. Salman has now moved on in his life and is allegedly in relationship with Iulia Vantur. On the other hand, Ranbir Kapoor and Katrina Kaif are going through a rough patch since last couple of months.

Take a look at the flashback video of Ranbir Kapoor and Salman Khan from Dus Ka Dum!