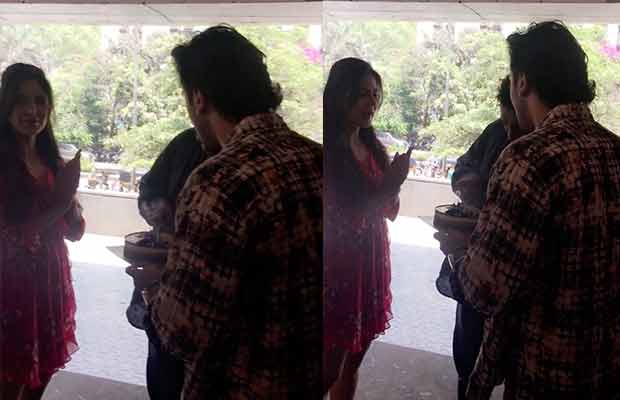 Former couple Ranbir Kapoor and Katrina Kaif who will soon be seen together in their upcoming film, Jagga Jasoos, celebrated director Anurag Basu’s birthday on the sets.

Ranbir and Katrina made sure to bring in Anurag Basu’s birthday in the most special way. The former couple, who are on a promotional shoot for Jagga Jasoos planned to surprise the director by cutting a cake on the sets.

Anurag Basu was speechless and overwhelmed by this gesture of Ranbir and Katrina. Going by the video, it seems Ranbir and Katrina do not share any awkwardness and are very much comfortable being as colleagues despite the much public break up last year.

While the release of the much-delayed film is a talk of the town, it is being reported that Katrina Kaif might not promote the film with her former boyfriend Ranbir. However, Ranbir has clearly rubbished the reports. There were rumours that Ranbir and Katrina would not promote Jagga Jasoos together, owing to their real-life friction.

Ranbir Kapoor at an event last month said, “It’s not like that. Katrina has worked really hard on the film. This film is as special as for her as it is for me. We will definitely promote it, and in a grand way. It takes a lot of efforts to make a film. It is a special film.

Well, during the initial stage of their break up, director Anurag Basu somehow managed to complete the shooting of his film with the former couple, who did not even wanted to see each other. Now after months, Ranbir and Katrina got back together but only to complete the final patchwork scenes of the film.

Jagga Jasoos is all set to release on July 14.