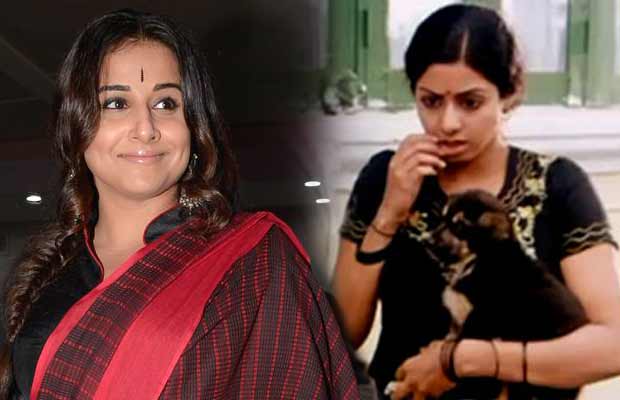 [tps_footer]Sridevi’s award-winning performance in Sadma (1983) is considered to be one of her best onscreen performances till date by critics as well as audiences. The film, which had Kamal Haasan alongside the actor, featured her as a woman who behaves like a child after suffering from amnesia.

Ad filmmaker Lloyd Bapista is all set to remake Sridevi’s 19183 film Sadma. He is hunting for actors who can tastefully play the lead characters in the film. Apparently, he wants Vidya Balan to play Sridevi’s role.

A source says, “Vidya is one of the leading names on his list. They also met recently to discuss the movie.”

While Baptista is keen on having Balan star in the remake, sources say that the actress is reluctant. The reason for this is touted to her jam-packed schedule and her reservations about stepping into the senior actress’s shoes.

“She isn’t keen to take up the role right now. She feels that no one will be able to match Sridevi’s performance,” says the source. “Also, Vidya’s hands are full currently. She will be working on three films this year. She is also looking to work on original scripts.”

Vidya has given her nod for Te3n, alongside Amitabh Bachchan and Nawazuddin Siddiqui as well as for Kahaani 2. She will also be seen in controversial author Kamala Surayya’s biopic. In addition, the Ishqiya will make a cameo in Marathi film Ek Albela, and as Begum Jaan in a Hindi remake of Rajkahini, a Bengali film.

Inspite of repeated attempts, Vidya remained unavailable for a comment.[/tps_footer]