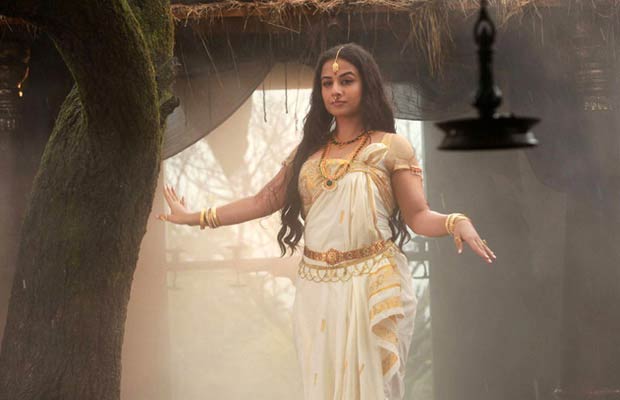 [tps_footer]Urumi is a Malayalam movie with a heavy star cast of Prithviraj Sukumaran, Prabhu Deva, Genelia D’Souza, Nithya Menon, Vidya Balan, Jagathy Sreekumar, Arya and Alexx O’Nell. This, 2011 epic Indian historical drama film is directed, filmed and co-produced by Santosh Sivan and is written by Shankar Ramakrishnan. And now it’s ready to re release again but this time as a Hindi remake and even Vidya got this news just four months ago, when Vidya Balan visited filmmaker Kiran Kumar in his Mumbai office for a photo-shoot and she was presented with a seven-minute freshly cut promo of ‘Ek Yoddha Shoorveer‘, the Hindi-remake of ‘Urumi‘, a south film she had shot for over five years ago. That’s a big surprise !!

Vidya currently, shocked everyone on social media after Sujoy Ghosh, the maker of Kahaani, posted a pic of Vidya‘s new look in Kahaani 2, where her beautiful face was only covered with green thick liquid. And now, a surprise re-release of a movie that even she won’t be thinking about, but Kiran Kumar has strong opinions in releasing this movie again with a Hindi remake and here is what he said, “Urumi is set in the early 16th century when Portuguese sailors invaded the Indian shores. It is a story about revenge and incorporates the life of Vasco Da Gama and his journey through South India.These concepts have never been explored in the North and the success of Baahubali made us realise that the audiences now is more open to a period saga like this.”

Kiran also added, “I began working on the remake a year ago and got in touch with all the actors. They have all agreed to come on board and promote it,” well, a lot of things are said and promised in the industry but very few turn out to be true and just like how Kiran had shared his plan for a re release with Vidya, he is ready to share it with us too. “I told her that I was going to take the epic action drama and give it a new ‘Baahubali style’ release. She was excited and loved the idea. We are dubbing and re-releasing the film across India, since all the actors have a huge fan following up North,”

Good luck for the re release of Ek Yoddha Shoorveer a.k.a Urumi to the entire cast and crew of this movie.[/tps_footer]