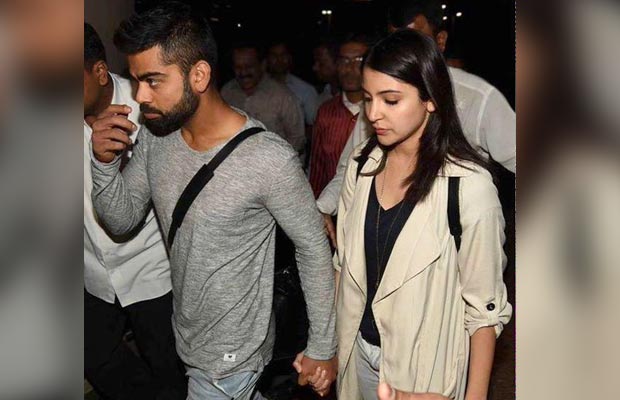 [tps_footer]Virat Kohli and Anushka Sharma were the most adorable tinsel town duo a while ago. The talented celebs were not just drenched in love but were also quite comfortable in accepting their relationship amidst the shutterbugs. Just when all the things were going pretty well, the two stars decided to call their relationship off.

The reason for their break up is not yet known but it is assumed to be Anushka’s career commitments. It is speculated that Virat who is currently the star of the cricket world wanted to take their relationship to the next level and Anushka Sharma who is loaded with projects was not ready for the same.

Seems like, all the dark clouds have passed by and the two past lovers are ready to mingle once again. Reports suggest that Virat Kohli and Anushka Sharma met for a hush-hush dinner date yesterday. The two celebs were spotted at Royalty Club in Bandra.

If reports are to be believed then the two mind blowing personalities appeared to be quite cozy with each other and also shared some amazing lost time. The two were reportedly comfortable with each other with no signs of awkwardness.

Additionally, their dinner date just did not end there. Virat and Anushka then headed to Salman Khan’s residence also. Anushka Sharma is currently working with Salman for the film ‘Sultan’. Well, we hope that this dinner date proves to be a good sign for Virat and Anushka’s relationship.

Currently, Anushka is also tied up with her upcoming film ‘Ae Dil Hai Mushkil’ apart from ‘Sultan’ whereas Virat has just given a mind blowing performance in the WT20.

We cannot wait to see them together!