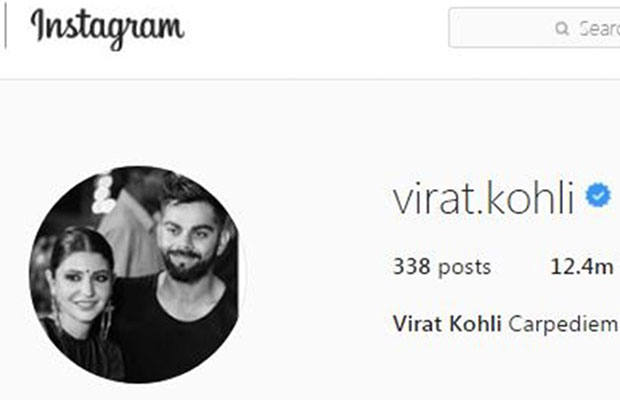 Virat Kohli just made it official again, the actor is showing her ladylove on Instagram and we should say that he is flaunting his relationship. The former Indian cricketer has taken to the world that his sugar bun is full of love and joy.

As we all know that Anushka is the favourite planet of Virat’s universe, the cricketer is drowning each day with Anushka and the two seem to be madly in love. It is a fair deal as both Anushka and Virat are damn serious.

He has kept his display on Instagram with Anushka and both look happy as ever in the pic. Anushka is dressed in Indian with nice jhumkas and a saree it seems, while Virat stands as a handsome guy in the display. They both look stunning as a jodi and have been stealing hearts since then. We’d like to tell you that the picture is from Yuvraj Singh’s marriage in Goa.

We have seen his post on Valentine’s day that was with Anushka Sharma and he had captioned it saying, ‘Everyday is a valentine day if you want it to be. You make every day seem like one for me  .@anushkasharma’ Now that is so adorable of Virat.

Everyday is a valentine day if you want it to be. You make everyday seem like one for me ❤❤. @anushkasharma

He looks too serious about his relationship with former actress Anushka Sharma. The two have been dating since long, but earlier they used to deny and didn’t speak about it so openly. Well, things have changed now.

We are pretty sure that this jodi of the Phillauri actress and our very own Indian cricketer Virat Kohli will lastlonger than ever. Keep coming back to BusinessofCinema for more updates.