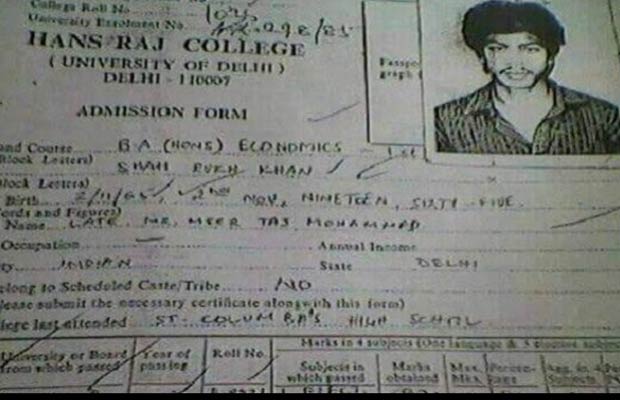 [tps_footer]We all know, how happy Shah Rukh Khan was after getting his graduation degree in Economics from Hansraj College and it gave him a new reason to celebrate a new success that he should have owned long back as he even earned it long bavk.

His endless tweets about thanking his fans for such a warm welcome, YRF and director Maneesh Sharma for deciding to do the launch of his song “Jabra Fan” from his latest movie “Fan” in Delhi, especially in Hansraj College, where he was a student, just like anyone of us before achieving Stardom and before becoming King Khan of the industry and his millions of fans. He cherished and relived his years of college life and shared it all with media, including his mark sheet.

Nothing can be hidden from media. Especially, anything about Stars. Shah Rukh Khan receiving his graduation degree after twenty eight years, itself, was a big news and the launch of a new song from his movie “Fan“, an anthem for all his real life fans, “Jabra Fan” this song became a breaking news for every channel and a story for all the tabloids, newspapers. But now, It’s his mark sheet that is making news.

Shah Rukh scored really well in most of the subjects and in English, he got 51. Well, it may look like average marks to anyone but honestly, it’s easier to score in other subjects but not in language and theory subjects. Yes, any day you can score really well in subjects like Economic, if you are really good at mugging laws, focusing on demand and supply, also focusing on the most important factors of trade like land, labour, capital and entrepreneur. Okay let’s end Economics here only, and have a look at our King Khan’s Mark Sheet.[/tps_footer]