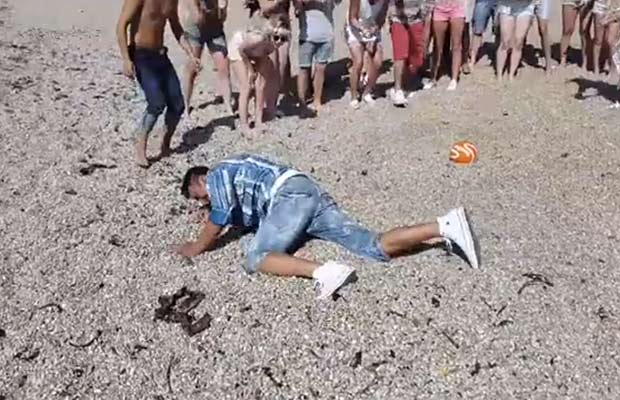 Bollywood’s Khiladi actor Akshay Kumar who leaves no stone unturned to get into the skin of his character is currently shooting for his next film ‘Housefull 3’ in London.

The challenged game is to take 13 rounds without taking your eyes off the ball. And soon after spinning 13 times the challenger has to score a penalty or #DizzyGoal with football.

After failing first attempt, Akshay Kumar tried to do the ‘Dizzy Goal Challenge’ for the second time. The actor is seen spinning around the ball on the sets of ‘Housefull 3’ in London. The entire performance is witnessed by gang of cheerleaders headed by his co-star Jacqueline Fernandez.

Well, we like the spirit of Akshay Kumar who is the first Bollywood actor to take up the challenge for charity.

We say Akshay Kumar should not feel bad of his failed attempt again and again as former footballers Gareth Bale, Alan Shearer, Gary Lineker and Liverpool Football Club players Jordon Ibe and Joe Gomez too have shared the funny videos of themselves while attempting the same.

‘Housefull 3‘ is directed by duo Sajid-Farhad and produced by Sajid Nadiadwala. The film also stars Jacqueline Fernandez, Nargis Fakhri and Lisa Haydon and is expected to hit theatres next year. While, Riteish and Akshay Kumar were already the part of Housefull prequel; Abhishek Bachchan is the new edition to the family.