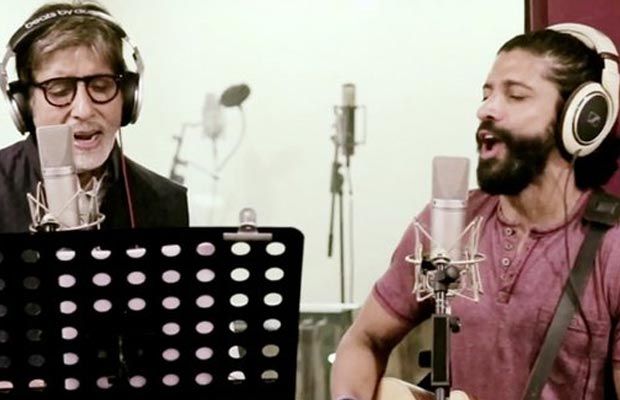 [tps_footer]Bollywood’s megastar Amitabh Bachchan and the most versatile actor Farhan Akhtar are coming together for the first time on silver screen in Bejoy Nambiar’s action drama, ‘Wazir’. Both lead actors have intense roles in the film. Audiences are very excited to see this duo on the celluloid. By the looks of the trailer, the movie looks compelling and acting is very impressive. Apart from excellent acting skills, Amitabh Bachchan and Farhan Akhtar have joined hands for a song in the movie. The actors unveiled a new song from ‘Wazir’ named ‘Atrangi Yaari’ on December 24, 2015.

‘Atrangi Yaari’ celebrates the friendship of Mr Bachchan and Farhan’s characters in the movie. Their characters have huge age difference, which is obvious, due to which their friendship is a bit weird and crazy. The tagline of the song is ‘Celebrate the friendship of the year’ featuring Amitabh Bachchan and Farhan Akhtar. The actors have also given their voice to the song. The song features the actors recording the song live while making the music video. Earlier, a love ballad ‘Tere Bin’ between Farhan and actress Aditi Rao Hydari was released which is soothing and beautiful.

Farhan Akhtar and Aditi Rao Hydari have started promoting their upcoming release while Big B hasn’t. The megastar is busy with his other commitments and will probably start promoting the movie next month.

‘Wazir’ trailer received immense appreciation from audiences. The film will also mark to be Farhan’s first action film as the actor dons the character of an ATS Officer. The film also stars John Abraham, Neil Nitin Mukesh and Manav Kaul in supporting roles. Written by Abhijat Joshi and Vidhu Vinod Chopra, ‘Wazir’ showcases Farhan Akhtar as an action hero for the very first time on celluloid. Directed by Bejoy Nambiar, ‘Wazir’ is all set to release on January 8, 2016.

Check out the song: