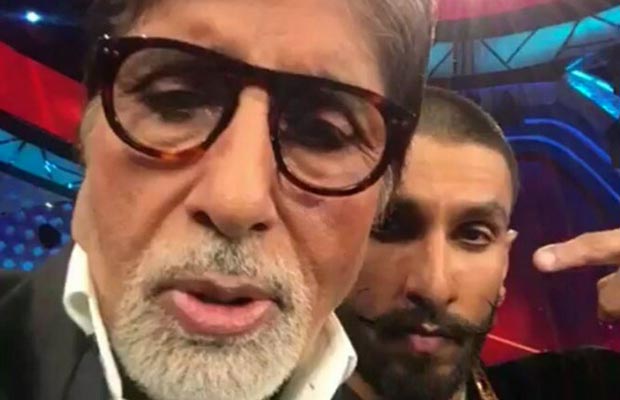 [tps_footer] Ranveer Singh is surely on the verge of fixing a big feather on his career cap with his upcoming film ‘Bajirao Mastani’. Well, not only are the fans all eager to witness the film on the big screen but seems like senior superstar Amitabh Bachchan is also all excited for the movie. The historic drama ‘Bajirao Mastani’ is directed Sanjay Leela Bhansali. The film stars the magnificent actors Ranveer Singh, Deepika Padukone and Priyanka Chopra in lead roles.

The trailer of the film ‘Bajirao Mastani’ has already released and is creating waves all over. The songs are applauded for their brilliant execution and detailing. Well, once again the film is in limelight not for something controversial but for a Dubsmash. By now we are all aware of Ranveer’s dialogue from the promo, “Bajirao Ne Mastani Se Mohabbat Ki Hai….Ayashi Nahi.” Well, Big B is also all impressed with Ranveer it seems. The mind blowing star Amitabh Bachchan in a jovial mood recorded a Dubsmash of the same dialogue in his intense avatar.

The lead actor of the film Ranveer Singh is seen in the background with Amitabh Bachchan in the video. Entertaining star Ranveer who is always ready for some fun and joy took to the micro blogging site Twitter and posted the same saying, “Now this .. is Epic !!! :))) the Biggest ‘B’ of all @SrBachchan #BajiraoMastani.”

After much hassles regarding the song Pinga seems like ‘Bajirao Mastani’ is witnessing some positives too. Directed by Sanjay Leela Bhansali the film is all set to hit the screens on December 18th, 2015. The film is based on the warrior Peshwa Bajirao. The historic drama is also in news as it will clash with Rohit Shetty’s film ‘Dilwale’ which releases on the same date.