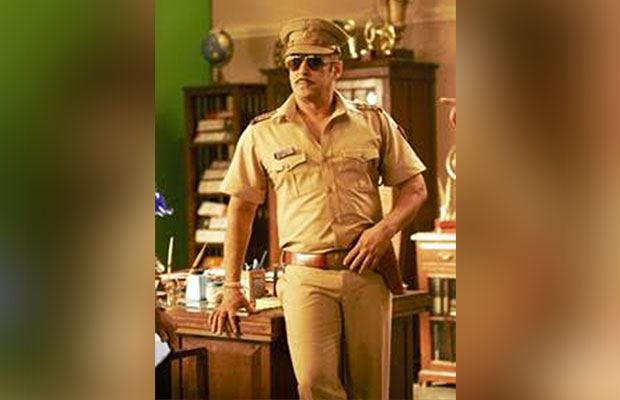 Salman Khan once again transforms into one of his most loved characters, Chulbul Pandey from Dabangg, an Arbaaz Khan Production, where he introduces the audience to the show and sets the scene for this spectacular stunt performance.

While getting ready for the shoot, Salman Khan commented, “As soon as the moustache and uniform is on, the voice changes, the gait and my whole personality changes. Today, I’m playing my character of Chulbul Pandey, a cop.”

Arbaaz Khan further added, “I feel no one could have played Chulbul’s role better than Salman Khan, as he added a dash of his own personality. While the script offers one thing, Salman had brought a lot more to the table.”

Set in an abandoned warehouse, this power packed attraction will take the spectators on an adventure with police officer Chulbul Pandey, where he has to rescue his damsel Rajjo and her friends from the grabs of fictitious goons.

One of Bollywood’s upcoming Directors, Shujaat Saudagar; on directing this introduction to the show; said, “Bollywood Parks™ Dubai has got this great show for Dabangg and we have Salman Khan and Arbaaz Khan, who will introduce the show to the audience.”

Located at Bollywood Parks™ Dubai within the Rustic Ravine zone, visitors will experience a live stunt show recreated from the Arbaaz Khan Production blockbuster hit Dabangg, where the main character Chulbul Pandey saves his love and the audience from a bunch of thugs. This live stunt show will be full of action and drama, that will leave the audience on the edge of their seats.

While shooting the video, you will witness the reel and real life banter between the two brothers.

Smiling at Arbaaz Khan, Salman Khan said, “As far as we are not working together, we are much better in private life. As soon as we start working…”

Completing the rest of the sentence for Salman, Arbaaz Khan continues, “… we make Dabangg together. We are two incredibly creative people, and together we bring out the best for the audience.”

He continued to say, “We appreciate the effort of the entire team who have created this humungously unbelievable show.”

Rustic Ravine will also host a Lagaan section, that will feature a mini carnival in the Champaner village with a Ferris Wheel, Carousel and 3 mini carnival games as well as the Lagaan Thrill of Victory ride, a rollercoaster-style motion based simulator experience. This zone will also have an interactive track‐bound dark ride called Sholay, The Hunt for Gabbar Singh with 3D projection, themed show scenes and 4D effects. Riders shoot their way through key scenes from the Bollywood classic film, Sholay.