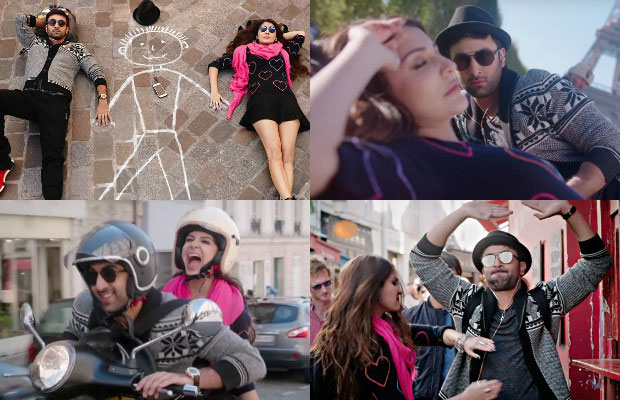 Karan Johar’s Ae Dil Hai Mushkil has won everyone’s hearts across the globe. The film is being loved by one and all and the main factor that has hooked the audiences to the film is its songs. The ace filmmaker Karan Johar had a surprise for the fans and he shared a delightful deleted song from Ae Dil Hai Mushkil. The song showcases Ranbir Kapoor and Anushka Sharma dancing on the streets of Paris. The song ‘An Evening in Paris’ surely takes everyone into the retro era and reminds of the legendary Shammi Kapoor.

Karan Johar took to twitter and posted the song’s link. His tweet read, “Here’s the deleted song from #ADHM! Thank you for the love, let’s keep celebrating! #WithLoveFromADHM.” Paris that is known as the city of love makes the song more interesting. The song takes everyone around the city of love. The grandson Ranbir Kapoor has very well recreated the song with Anushka Sharma and the duo takes us to the retro era with a modern day Paris.

The characters of Ranbir and Anushka in Ae Dil Hai Mushkil are seen in a very filmy avatar. The duo is also seen singing old melodies in the film and Ranbir Kapoor plays a huge fan of Mohammed Rafi Sahab. Well, we wonder why KJo removed ‘An Evening In Paris’ from the film. The song that originally starred Shammi Kapoor and Sharmila Tagore has surely made everyone nostalgic.

Apart from this, one cannot get over the sizzling chemistry between Ranbir Kapoor and Anushka Sharma. Even Aishwarya Rai Bachchan’s pairing with RK was loved by everyone. The film is still running strong at the box office and it might soon enter the 100-crore club.