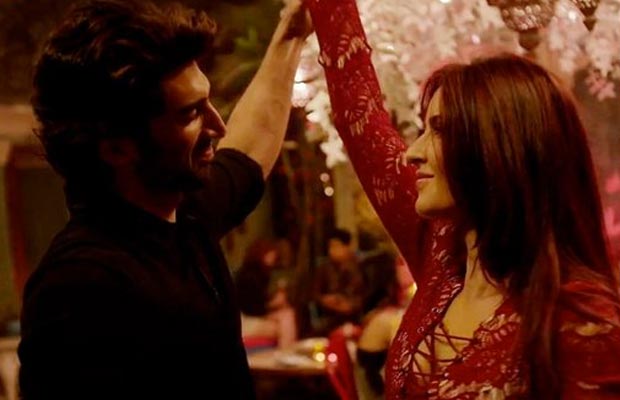 [tps_footer]Bollywood actors Aditya Roy Kapur and Katrina Kaif are starring in an intense romantic love story, ‘Fitoor’. On Monday January 4, the cast of ‘Fitoor’ launched the trailer of their upcoming saga that looked pretty impressive. Today, the first song of the movie was released which is the title track ‘Yeh Fitoor Mera’.

‘Yeh Fitoor Mera’ recites the beginning of the love between the lead characters Firdaus (Katrina Kaif) and Noor (Aditya Roy Kapur). Just like the trailer, the song is mix of soulful romance, mystery and much more. Aditya and Katrina are seen romancing and also have some passionate scenes in the song. The song is soothing and beautifully showcases the budding romance between the characters. Filmed in the backdrop of Kashmir, the song shows a poor boy who is an artist who falls in love with a rich girl. Arijit Singh has lent his voice to this soulful track and music is by Amit Trivedi.

‘Fitoor’ is an adaption from Charles Dickens’ thirteenth and the penultimate novel, ‘Great Expectations’. The movie features three pivotal characters namely Noor (Aditya), Firdaus (Katrina Kaif) and Begum (Tabu). Tabu came in later in the project after Rekha decided to opt out from the film. Directed by Abhishek Kapoor, ‘Fitoor’ is set to hit the screens around the Valentine’s Day on February 12, 2016. It however, clashes with another romantic flick – Pulkit Samrat-Yami Gautam’s ‘Sanam Re’.