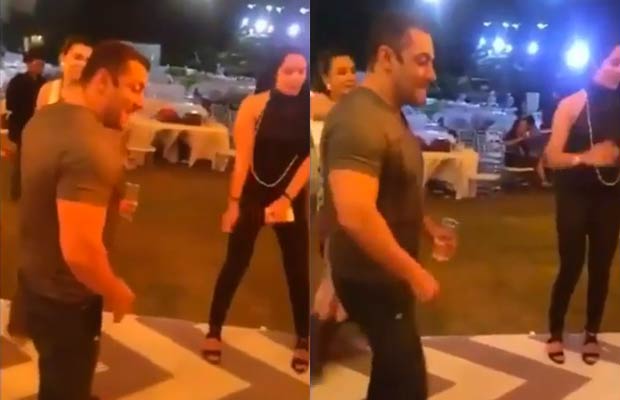 [tps_footer]It was a special occasion for Salman Khan’s family on Sunday, as their sweetheart Arpita Khan Sharma is going to be mommy soon. Bollywood stars Elli Avram, Sangeeta Bijlani, Anushka Sharma and many others attended Arpita’s baby shower on February 14.

It was quiet a star-studded event as many stars from the film fraternity including Kabir Khan, Ritesih Deshmukh, Genelia D’Souza, Shilpa Shetty were seen at Arpita’s baby shower. Being a doting brother, Salman Khan didn’t leave a chance to make the party more entertaining. The actor was seen dancing his heart out with other guests like never before.

The pictures of Arpita’s baby shower party showed that the stars had a gala time, but the recent video of Salman dancing is surely a must watch. We got our hands on the video where Salman Khan is seen dancing his heart out on songs like ‘O O Jaane Jaana’, ‘Sooraj Ki Baahon Mein’.

Like every other event or party, Salman Khan is always in spotlight and once again the actor grabbed all the attention. He was also seen with his first love and former girlfriend Sangeeta Bijlani throughout the event. From receiving Sangeeta on her arrival, to staying by her side all the time, Salman and Sangeeta were seen together through out.[/tps_footer]