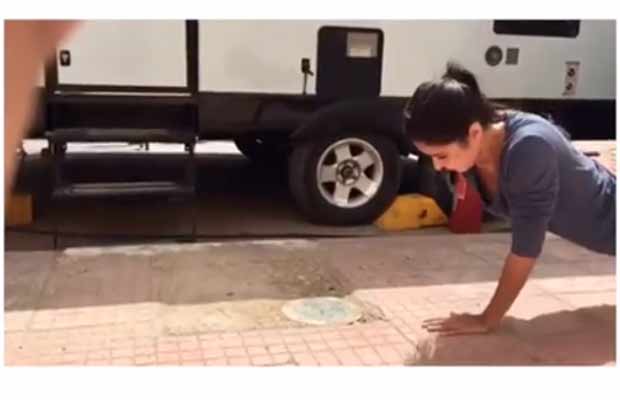 Katrina Kaif tries to do push-ups without using her hands and it is hilarious!

The Bollywood actress Katrina Kaif had delighted all her fans by joining the picture sharing site, Instagram. Since the day, the actress has been sharing her cute and cuddled up pictures via her account and fans seem to can’t get over it. She also joined the social networking site Facebook, last year on her birthday.

The actress has shared another video in which she can be seen working out on the sets of her film. Katrina, in the video, can be seen doing push-ups. She has shared it on her Instagram page captioning it as, “Warming up on set. @rezaparkview”

Warming up on set . @rezaparkview

What happens in the video is that the ‘Jagga Jasoos’ actress started doing push-ups using both her hands. Then after a few push-ups, she lifts her right hand and does the same exercise using just her left hand.

And after a few more push-ups what she does is simply shocking. She lifts her left hand as well and can be seen hanging in the air without any support. But what happens after that will leave you in splits.

The video shows further that she was not actually doing the push-ups. The actress was just lying upon a wooden plank which was being lifted by another man. And that is how she was swinging up and down.

We must say that it was a nice prank, Katrina!

Katrina Kaif was last seen with Ranbir Kapoor in the film ‘Jagga Jasoos’ which released on July 14, this year. She is currently working with Salman Khan in ‘Tiger Zinda Hai’ which is slated to release on December 23, this year. She is also a part of Aamir Khan’s ‘Thugs Of Hindostan’.