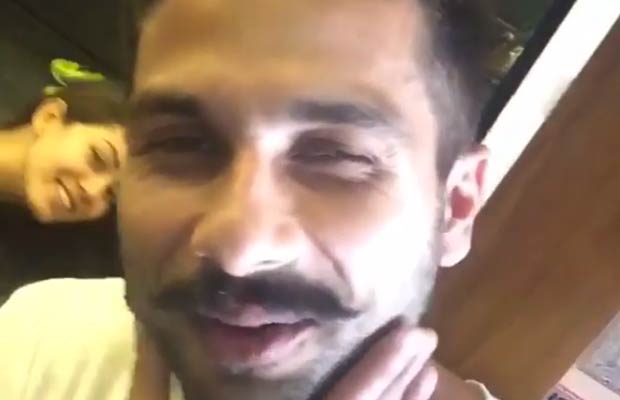 Bollywood actress Sonam Kapoor is all set with the release of her most bravest and courageous film ‘Neerja‘. The move is based on a real life story of Neeraj Bhanot and how fear gave her courage.

As her movie talks about overcoming fear, Sonam Kapoor requested her fans to send videos on their fascinating fears. Following the same, even Bollywood actors join to do so. From Arbaaz Khan to Anil Kapoor, Shahid Kapoor and few others sent Instagram videos of them saying what they fear the most.

The most recent one to do so was handsome hunk Shahid Kapoor and his video is surely a must watch as it has Mira Rajput’s special appearance in it. One can see in the video, Shahid Kapoor says he has no fear nor he is scared of anyone. Surprisingly, the next second Mira waves at the camera.

Well, you shouldn’t afford to miss Shahid Kapoor’s reaction on the same!

Take a look at the video below.

@shahidkapoor @mira.kapoor is one lucky girl! She is too sweet for you to be scared of her! Love you for doing this Sk #bestpersonever #fearvsneerja #Repost @shahidkapoor ・・・ @sonamkapoor #neerja #nofear

You’re so cool Homi! Fear indeed keeps you alive! Love you for sharing this! #Repost @homster ・・・ #Fear can keep you alive…embrace your fears, use your fears, don’t let it be the other way around … #fearvsneerja @sonamkapoor #adventure #adventuresports #life

HahahahhH daddy!! My biggest fear is mom! #Repost @anilskapoor ・・・ #fearvsneerja @sonamkapoor Fear is not a factor!

Hi everyone I often wonder how fear gave Neerja courage. I would love to hear your stories in 15 second Instagram videos. The most fascinating and touching stories will be posted by me, so that your stories can inspire other people to overcome their fears. You can be also be #Neerja. Use #fearvsneerja when you post!

On the work front, Shahid Kapoor is currently shooting for his upcoming film Rangoon which also stars Saif Ali Khan and Kangana Ranaut in the lead roles. Directed by Vishal Bhardwaj, the film is all set to release this year!