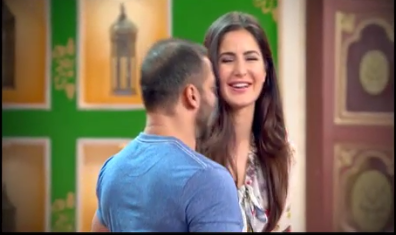 Look who dropped in on #ComedyNightsLIVE!

Catch @BeingSalmanKhan & the cast of #Fitoor this Sunday 10PM! https://t.co/IUCjUSCrg5

[tps_footer]Post Ranbir Kapoor and Katrina Kaif’s break up, Bollywood’s former couple Salman and Katrina seem to be bonding and meeting each other quiet often nowadays. As earlier we informed, Salman Khan gave a surprise to Katrina Kaif by suddenly arriving on the sets of ‘Comedy Nights Live’ where the actress was promoting her upcoming film Fitoor with co-star Aditya Roy Kapur.

Salman Khan, who was shooting next door for his film Sultan, surprisingly dropped in to meet Katrina and Aditya Roy Kapur. After giving a glimpse of them meeting on the sets, we have got a video, which shows how the actor made his surprise entry on the show while Fitoor stars were promoting their film.

On can see in the video, how Salman Khan stepped and left the audiences enthralled. He then says, “I heard Katrina was promoting Fitoor here and so I thought I will come and say hi to you guys.”

Well, post Ranbir and Katrina‘s break up, it seems Salman Khan is being more open on his friendship and closeness with Katrina Kaif. The actor is grabbing all the opportunity to meet his former girlfriend!

Recently, during an interview, Katrina Kaif who is ignoring to answer anything about Ranbir Kapoor and her break up with him, chose to speak about former love Salman Khan. The actress stated that she shares the bond of respect with Salman Khan today and that the respect is a very important factor in any equation.[/tps_footer]