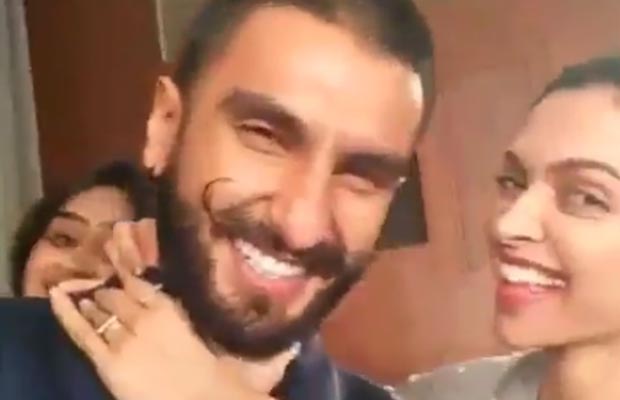 [tps_footer]‘Bajirao Mastani’ actors Ranveer Singh and Deepika Padukone are undoubtedly too much in love. The two highly talented actors will soon be seen embraced in a historic love story. Well, apart from their serious historic movie Ranveer and Deepika have also teamed up for a fun and cute Dubsmash. Dubsmash has become the trend of the season, and almost Bollywood celebs have tried it at least once. After the very famous dialogue from ‘Bajirao Mastani’; “Bajirao Ne Mastani Se Mohabbat Ki Hai….Ayashi Nahi”, Deepika Padukone has tried something new.

Ranveer Singh has done his set of Dubsmashes with loads of stars, but this one with his lady love is indeed special and adorable by all means. Ranveer Singh and Deepika are seen in a Dubsmash where both of them are in a candid mode and are seen enacting the dialogue, “Kiski talvar par sar rakhu yeh bata do mujhe…Ishq karna agar khata hai toh saza do mujhe”.

The highlight is that the stated dialogue is actually said by Deepika in the movie but in the Dubsmash Ranveer is seen saying the dialogue whereas Deepika is laughingly acting it out. After the dialogue both the talented actors laugh their hearts out. Must say, the two are undoubtedly the most charming love birds of the tinsel town.

The two actors Ranveer Singh and Deepika Padukone are busy promoting their film ‘Bajirao Mastani’. Priyanka Chopra who is also the lead in the film is not seen during the promotions as she is shooting for her American series Quantico.

Directed by Sanjay Leela Bhansali, the historic drama ‘Bajirao Mastani’ is based on the life of warrior Peshwa Bajirao. The film stars Ranveer, Deepika and Priyanka in lead roles. The much awaited film will hit the screens on December 18th, 2015.[/tps_footer]