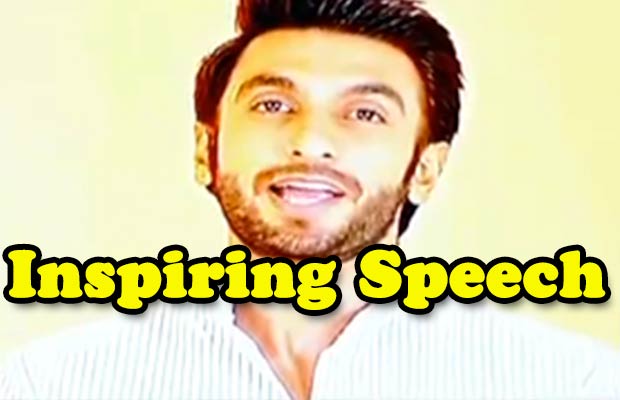 [tps_footer]Ranveer Singh is rightly labeled as the most talented actor of B-town. The superstar who has reached the pinnacle of success in no time was recently showered with praise and was awarded as the Indian Of The Year. Ranveer is filled with back to back projects and never ending films. The handsome hunk nonetheless is always up for interacting with his fans and media.

The Ram Leela actor was absent for the award ceremony as he was busy shooting in Paris. The busy bee however, recorded a speech for receiving the award. Humble actor Ranveer in his speech said that he is thankful to all for recognizing him as the most bankable actor. The actor went ahead and also commented that this honor has filled him with responsibility.

The highly talented actor who is the most spontaneous in the young lot was seen in two films in the year 2015 namely ‘Dil Dhadakne Do’ and ‘Ram Leela’. Both the movies did immense business at the box office and also up-scaled Ranveer’s stand in the industry.

@Regrann from @yashrajfilmstalent – WATCH: @ranveersingh thanking everyone for the #IndianOfTheYear Award ~ whilst his Father accepted the award on his behalf. #Regrann

Currently, the actor is looking forward for his upcoming film ‘Befikre’. The film has just released its new poster and is receiving positive comments. ‘Befikre’ stars newbie Vaani Kapoor opposite Ranveer. The movie is high on the minds of the audience as it is directed by Aditya Chopra. ‘Befikre’ is majorly shot in Paris. The first poster of the film saw Ranveer and Vaani engrossed in a lip lock and the same is also depicted in the second poster. Grabbing all the attention the film will hit the screens on December 9th, 2016.[/tps_footer]