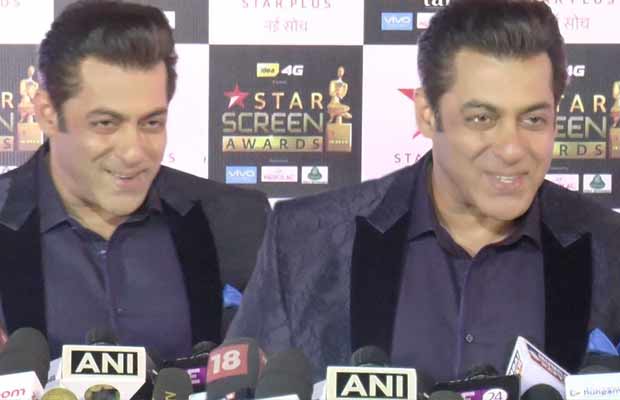 Salman Khan’s best response on the question of teaming up Katrina Kaif in Tiger Zinda Hai.

Salman Khan and Katrina Kaif‘s smokin’ hot chemistry in the recently released song ‘Dil Diyan Gallan’ from Tiger Zinda Hai is a talk of the town. Their unspoken sizzling chemistry is winning hearts all over. One can’t get enough of their on-screen as well as off-screen chemistry. The duo has been one of the most favourite pairs. After a gap of almost five years, Khan and Kaif will be back together on the silver screen with Ali Abbas Zafar’s ‘Tiger Zinda Hai’.

Well, as they are pairing up after five years, fans are eagerly waiting for their film. Since the shooting of the film started, Kat and Salman Khan have always created much buzz.

Well, at the recently held Star Screen Award 2017, Salman Khan was asked about how does it feel romancing and teaming up again with Katrina Kaif. The ‘Sultan’ star replied “It is good. It is always good to romance. As there’s no fight, so, it’s good to romance.”

Tiger Zinda Hai has been filmed in Abu Dhabi, Austria, Greece and Morocco and each destination has its own significance. Directed by Ali Abbas Zafar, the film also stars Angad Bedi and is releasing on December 22.

Tiger Zinda Hai: Did Salman Khan Just Hint Something On His Personal Equation With Katrina Kaif?