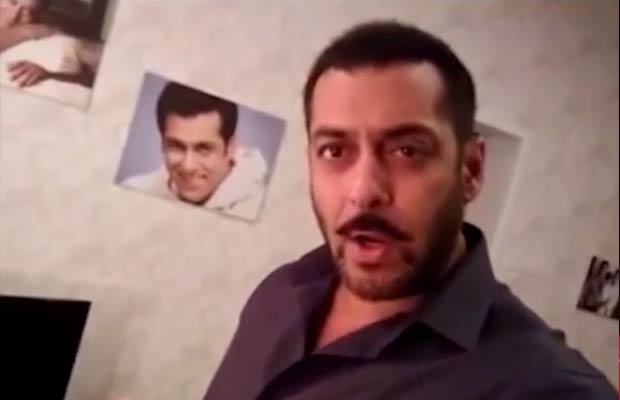 [tps_footer]Bollywood actress Sonam Kapoor is all set with the release of her most bravest and courageous film ‘Neerja‘. The movie is based on a real life story of Neeraja Bhanot who saved number of passengers on a flight.

As her movie talks about overcoming fear, Sonam Kapoor requested her fans to send videos on their fascinating fears. Following the same, even Bollywood actors join to do so. From Arbaaz Khan to Anil Kapoor, Shahid Kapoor, Alia Bhatt, Karan Johar, Esha Gupta, Huma Qureshi and few others sent Instagram videos of them saying what they fear the most.

The recent one to reveal his fear is none other than Salman Khan. The actor in his selfie video revealed that when they were kids, father Salim Khan advised only one thing, “joh darr gaya, samjho marr gaya.” The advice of Salim Khan also turned into a dialogue for the movies then. Well, as we all know Dabangg, Salman is never scared of anyone and anything.

Looking at the video, it seems his father’s advice is what keeps him motivated and fearless.

What was the legend Salim Khan’s advice to his son @beingsalmankhan to conquer fear? Check it out..

Esha you beauty! Thank you.. This is inspiring! #Repost @egupta ・・・ Conquer your fears, don’t let them conquer you. #fearvsneerja @sonamkapoor #goneerja

Kjo all your profiles are beautiful! But I guess I’m biased about family! Love you! #havenofearkjoishere #Repost @karanjohar ・・・ @sonamkapoor #fearvsneerja

My father is my role model and someone who inspires me every day.. I #fear letting him down. But my parents unconditional love gives me strength to face my #Fears! #fearvsneerja @anilskapoor @kapoor.sunita @foxstarhindi

@shahidkapoor @mira.kapoor is one lucky girl! She is too sweet for you to be scared of her! Love you for doing this Sk #bestpersonever #fearvsneerja #Repost @shahidkapoor ・・・ @sonamkapoor #neerja #nofear

HahahahhH daddy!! My biggest fear is mom! #Repost @anilskapoor ・・・ #fearvsneerja @sonamkapoor Fear is not a factor!

Talking about Sonam Kapoor’s film Neerja, directed by Ram Madhvani, ‘Neerja’ is scheduled to hit the screens on February 19, 2016. The biopic ‘Neerja’ will tell the story of flight attendant Neerja Bhanot who saved the lives of 359 passengers on a hijacked flight. Veteran star Shabana Azmi will be seen playing the role of Neerja’s mother.[/tps_footer]