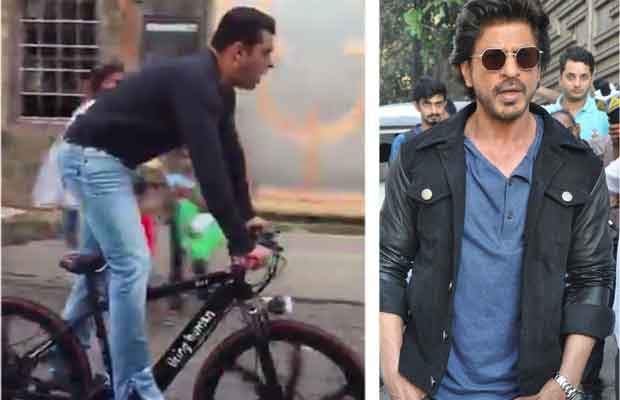 Salman Khan was recently seen riding a bicycle on the roads of Mumbai. Specially after launching Being Human e-cycles, The Dabangg star is frequently spotted cycling. Whether it is a promotional gimmick or he is simply enjoying his e-bike.

Just today, Ek Tha Tiger star posted a video on social media of him cycling. While he was cycling her crossed Shah Rukh Khan’s house and called out for him.

Salman Khan looked every bit happy gliding, while a car followed him to shoot the video. There were fans who greeted him, and when he crossed Shah Rukh Khan’s Mannat, he called out Shah Rukh Khan’s name in excitement. The Dilwale star will be seen in a cameo in Tubelight. The film is set to hit the screens this Eid.

The Sultan star has geared up for the shooting of Ali Abbas Zafar’s Tiger Zinda Hai. The film will bring back former couple Salman and Katrina after 4 years.

Tiger Zinda Hai is a sequel to the hit romantic action film, Ek Tha Tiger (2012). Ali Abbas, who replaces Kabir Khan as the director, has already started with the shooting of the film in Morocco. The film is said to be the story of an Indian spy (RAW) code-named Tiger. He (Salman Khan) falls in love with a Pakistani spy agent during an investigation.

Brothers and in law ?