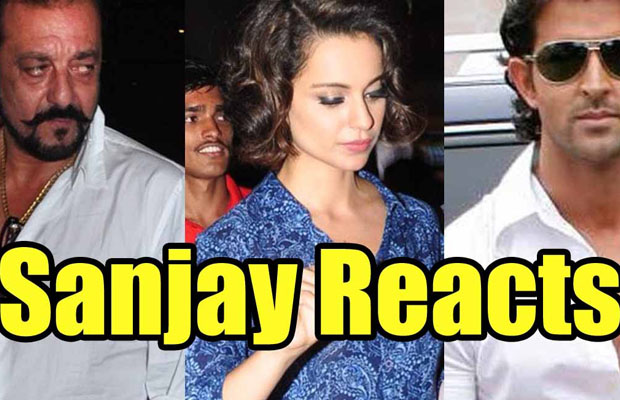 [tps_footer]Each and everyone is talking about Hrithik Roshan and Kangana Ranaut‘s controversy and in fact, even Bollywood stars are being dragged and are asked about their opinion on the same. Recently, Sanjay Dutt, who was spotted at Mumbai airport with wife Manyata, was also asked to comment on the burning topic of Bollywood.

Sanjay Dutt, who is close to Hrithik Roshan, was asked about resolving the spat between Hrithik and Kangana Ranaut. To which, he replied saying, “Let me patch myself first and then will think about patching others.”

Dutt, who was all excited and in a happy mood yesterday, also expressed his happiness at Salman Khan‘s recent appointment as a goodwill ambassador for Rio Olympics. He said, “It’s a good thing.”

Well, Salman Khan and Sanjay Dutt are very close friends since decades and their strong friendship has been an example for many. When the Munnabhai actor was asked about Salman’s Sultan teaser, he replied saying that he is yet to watch it and will see it soon.

On the work front, Sanjay Dutt is looking forward to giving a new start to his career and life. Reportedly, Sanjay Dutt has 6 upcoming films that will be touted as his big comeback. There has been no official confirmation from Dutt’s side but it is said that he will be seen in six films ‘Marco Bhau’, ‘Third part of Munna Bhai franchise’, ‘Khalnayak Returns’, ‘Kaante 2’ and Prabhu Deva’s directorial venture.