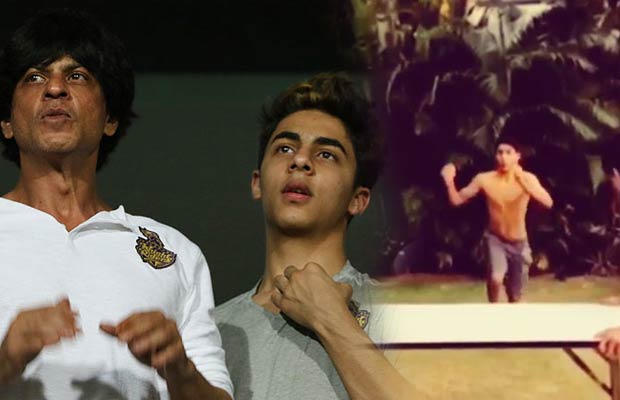 [tps_footer]Bollywood superstar Shah Rukh Khan has been everyone’s favourite since the beginning of time. But, it is his son Aryan Khan is a social superstar who impresses ladies with his handsome face.

Aryan Khan has always been in limelight, courtesy SRK. Though, he doesn’t interact at all with media, he is always caught by shutterbugs at various places. It is not just the stardom of his father but he himself is growing up to become the successor of Khan clan.

Through pictures on social media, we can say that Aryan is very famous among the ladies. He keeps posting pictures with his friends, chilling beside swimming pool or partying with them on his instagram. But, he doesn’t stop there. A video is doing the rounds of Aryan attempting a crazy stunt. One more talent that can be added to Aryan’s list of talents is his crazy gymnastic skills. We came across a video where he attempts a back flip on his own that shows that Khan Jr. is ready for his Bollywood debut. The video was shot in Bangkok and is throwback video when he was there for vacation with his friends. Doesn’t this remind you of Tiger Shroff?

Well, Aryan is already a big name and has been flaunting his skills. It seems like the guy is ready to make his mark in the industry and is going to take it over by storm.

On the other hand, Aryan’s father SRK released his new trailer for his upcoming film ‘Fan’ yesterday. He is very proud of the film and is eager for his kids to watch it. Directed by Maneesh Sharma, the film releases on April 15, 2016.