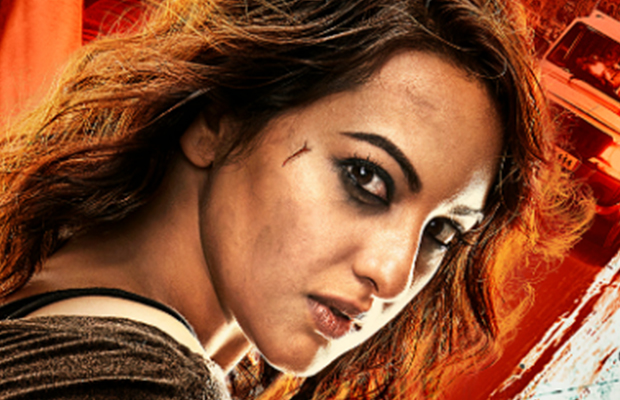 [tps_footer]Sonakshi Sinha who is out of the limelight currently will soon be seen in the film ‘Akira’. The mind blowing actress who believes in being straight forward will be seen in a dare-devil image in the film. Sonakshi made her debut in the tinsel town with ‘Dabangg’. Since then the beautiful actress is on a success spree.

Sonakshi has given a glimpse of her character in the teaser of ‘Akira’. The brief teaser has finally released but is extremely fast paced with hardly a few seconds. ‘Akira’ is directed by A R Murugadoss. The teaser is a unique one as it initiates with Murugadoss’ ‘Ghajini’. The teaser sees a shot of the film ‘Ghajini’.

After the powerful glimpse of ‘Ghajini’, the teaser proceeds to the power packed image of Sona. The teaser sees Sonakshi in a fierce image. The starlet is stern-faced and is seen in a fighting mode. It is said that Sonakshi will perform martial arts in the film.

‘Akira’ is the Hindi remake of the Tamil film ‘Mounaguru’. The trailer of the much-awaited film will release on July 04, 2016. The film also features Sonakshi’s father Shatrughan Sinha.

Apart from the stated film, Sonakshi will also be seen in the films ‘Force 2′ and Sunhil Sippy’s ‘Noor’.
[/tps_footer]