As earlier, we revealed that Bollywood’s King Khan, Shah Rukh Khan will lend his voice to his close friend Sonu Sood’s upcoming film Tutak Tutak Tutiya, which also stars Prabhudheva and Tamanna Bhatia. Finally, the trailer of the film is out with Shah Rukh Khan as the narrator in the film.

Shah Rukh Khan’s voice in the film adds an extra charm to the horror comedy film. Moreover, it’s amazing to know that despite his busy shooting schedules in Prague for his upcoming film “The Ring”, SRK took some time out to record the voiceover and sent it to Mumbai before the trailer launch of the film. And the output is undoubtedly amazing!

Well, the makers of the film wanted SRK to be a part of the film but the actor could not make it, as he is shooting for his next in Prague. SRK is a cherry on the cake in the trailer of the film.

The trailer of the film was released yesterday on YouTube. Sonu Sood took to twitter to thank SRK. He tweeted, “Thank u so much @iamsrk for being a part of my first journey as a producer. Really means a lot” 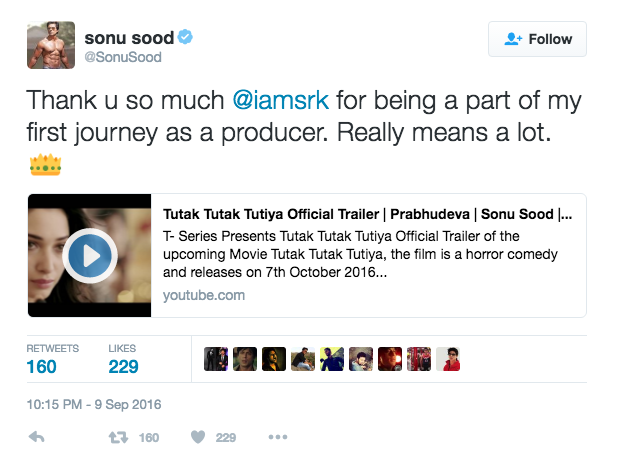 Tutak Tutak Tutiya will be released in three languages, Hindi, Tamil and Telugu on October 7.