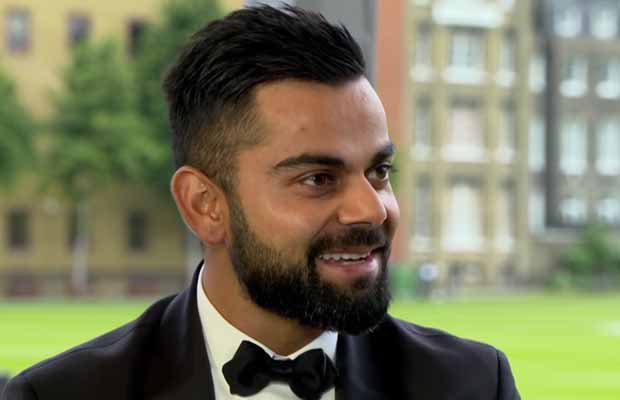 Fans can’t get enough of Anushka Sharma and cricketer Virat Kohli making public appearances together. The two are giving some serious relationship goals and the guarded PDA between the two is loved and adored by their fans. The adorable couple is going strong with each passing day and each one is waiting for them to get married. After Zaheer Khan and Sagarika Ghatge’s engagement, fans are eagerly waiting for Anushka and Virat Kohli to get married to each other.

While Anushka avoids talking about Virat on the public platforms, Virat Kohli is quite comfortable and confesses how the Sultan actress has changed his life. Virat, in a recent interview, talked about a special moment he shared with his ladylove. The handsome hunk revealed that it was in Mohali, during a test series when he was told he would be Test captain, he called up Anushka and shared the most emotional moment of his life. Virat shared that he was happy to know that Anushka was there with him to share the happiest moment.

In fact, in a recent interview, Virat revealed that how Anushka’s presence in his life has changed everything.  The Indian Cricket team captain was quoted saying, ”I have always been fond of animals, but I never had the compassion and love that I feel now and that’s mainly because of Anushka. She has changed the way I see these things, and the way I think about animals; now I’ve genuinely started feeling this deep love for them…”

It is so great to know that how Anushka and Virat are supporting each other on the professional front. Well, one thing is sure that Anushka Sharma’s positive impact on Beau Virat has changed a lot of things in the cricketer’s life. We wish them going this strong with each passing day and years!

While we just can’t get over their cuteness, take a look at Virat’s interview below: