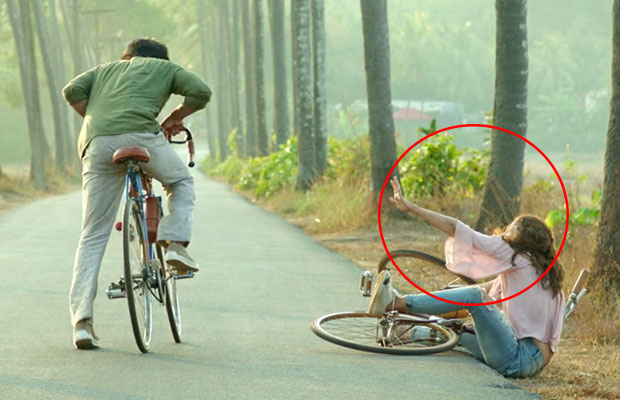 SRK–Alia kept us waiting for this Dear Zindagi Take 1 and finally, the first teaser was unveiled yesterday.

The first teaser of Shah Rukh Khan and Alia Bhatt starrer Dear Zindagi was released yesterday and it surely took away our mid-week blues. Every bit of the teaser is beautiful! The cute bonding between Alia and Shah Rukh Khan has already won many hearts and we can’t stop gushing about it. The one-minute long teaser video is all about SRK giving life lessons to young Alia.

Dear Zindagi teaser showcases us that life is a game and you need your own rules to play it. The cute teaser opens up with SRK as a mentor teaching Alia how to play, “samandar se kabaddi”. And then, in the middle of the beautiful, breezy lane, Alia and SRK go on a cycling. Alia tells Shah Rukh Khan that she wants to be free of everything and the next second she falls off from the cycle. Isn’t that so beautifully showcased?

But there is something very surprising and amazing thing that you missed to notice in the trailer. If you notice carefully in the teaser, when Alia falls down from the cycle, She asked SRK for help. But Shah Rukh Khan moves ahead without helping her and that’s when Alia shouts, “Shah”.

Yes, that’s SRK’s name in the film. It seems the makers of Dear Zindagi have used the real name of b in the film and it’s surely going to connect to each of his fans. Moreover, it was adorable the way Alia called him, “Shah.

Watch this moment right in the teaser below: