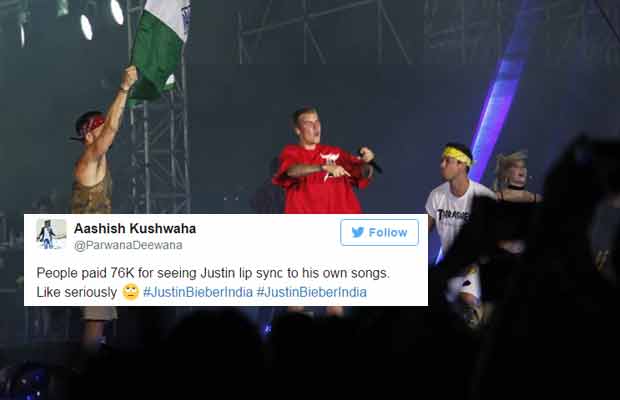 Justin Bieber fans could not hold their excitement and emotions after the pop singer took the stage at DY Patil Stadium last night. After waiting hours and hours in queues since morning, Justin fans finally relished his performance from 8 PM onwards yesterday. The crowd went berserk and was constantly sharing pictures and videos on social media. However, the concert had left many disappointed and moreover, because they paid hefty sum to purchase a single ticket for Justin Bieber’s concert that took place last night in Navi Mumbai.

Fans were disappointed but why? Apparently, Justin was lip-syncing to his popular songs. Fans were also shocked to see Justin spitting out gum mid-gig. Well, twitter users did not spare him and criticized the Canadian pop singer with some hard words.

So Justin Bieber was lip syncing..

Is it too late to say sorry now ?

Is it me that feels like Justin bieber did dubmash for 75000 rupee ticket. (only lip syncing) #JustinBieberIndia

Check out some of the videos from last night’s concert and judge yourself if Justin Bieber was actually lip-syncing.

What do you think? Has Justin cheated his Indian fans? Moreover, when fans had shelled out a huge sum of Rs 75,000 rupees for a single ticket to watch the Grammy award winner singing live. How was your experience at Justin Bieber’s concert? Share your views in the comments section