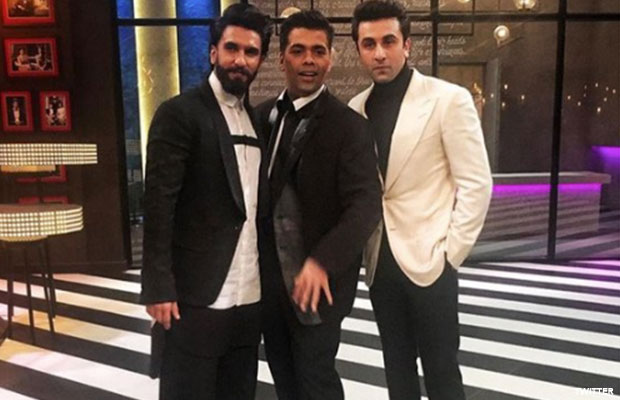 Karan Johar was lauded with an appreciation for doing something that never happened before. He got two contemporaries as well as competitors to share coffee and couch on his popular chat show Koffee with Karan. We are talking about none other than Ranbir Kapoor and Ranveer Singh who will be sharing screen space on national television for the first time.

The teasers of this episode are out and people can’t stop raving about the chemistry between the two hunks. The glimpses of them grooving to Katrina Kaif’s Chikni Chameli and doing her signature moves to taking digs at Shah Rukh Khan, only leaves us wanting to know what else happened on the show. These hotties were clearly having a blast.

However, it seems like the show was scripted!! Yes, and they did that to make it more entertaining. And of course, it doesn’t come as a surprise that it was Ranveer’s idea to do so. Also, the Tamasha star wasn’t happy with it initially but did it nevertheless when convinced by his Ae Dil Hai Mushkil director and host, Karan Johar.

It was also said that all the punch lines were scripted and the two actors knew all the questions that Karan was going to ask them. Everything including the Chikni Chameli dance bit and the ‘red chilies’ comment was also scripted!

Further, it seems 70% of the show was scripted and only the quizzes were kept spontaneous.

Also, Ranveer and Ranbir had apparently chosen to give some cocky replies to the personal questions asked. For example, when KJo asked them about Deepika they went all out to give him some sarcastic replies.

The usual format of the show is to give the guests a brief  about how the episode will pan out and be asked  if they were okay with it or whether they want anything done differently. However, it seems this particular episode was highly scripted compared to any other in any other season. Example of Kareena and Sonam‘s episode was also given saying that it was hardly scripted.

Obviously, now this leaves us wondering if  the chemistry was real or not. It has come to our knowledge that the two stars were absolutely fine and cordial with each other. However, they weren’t like buddies as it appears on the show!! So it was all acting??

Ahem. This is an interesting bit of information, isn’t it?