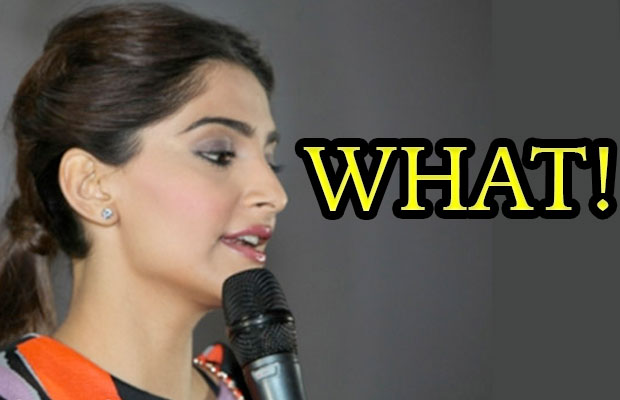 [tps_footer]Sonam Kapoor is a synonym to good looks and fashion. The young starlet who is an equally popular name in the Hollywood industry is known for her daring style sense. Sonam has always been outspoken about controversial matters too. The amazing actress never shies away from commenting her heart out. Recently, the Neerja star has made a shocking revelation.

As we all know the gorgeous Raanjhanaa actress is blessed with amazing tresses. The actress is known for her out of the box hairdos too. Many Bollywood stars have transformed themselves drastically to fit in the shoes of a character. Actor Ranveer Singh too went bald for his film ‘Bajirao Mastani’; likewise, veteran actress Shabana Azmi also did the same for her film.

Seems like, the Kapoor girl is also up for this sort of a transformation. It was well assumed initially, that Sonam is too engrossed with her looks and pretty image. The starlet shocked everyone when she openly commented that she would not mind if she was asked to go bald for a film. The actress in an interview expressed that she was actually asked to go bald for two films by two directors namely Rakeysh Omprakash Mehra and Sanjay Leela Bhansali.

The mind blowing star shared that she was first approached by Rakeysh Omprakash Mehra for starring in ‘Mirzya’ for which she was asked to go bald. Likewise, the actress was also asked to go bald for Sanjay Leela Bhansali’s ‘Saraswati Chandra’.

Sonam commented that she had nodded a yes to both of them, but the films did not turn up. Further, the Kapoor girl also spoke about what beauty means to her saying that it is not only about physicality, but it is instead about inner beauty and inner strength.

On the work front, Sonam Kapoor will soon share screen space with Kareena Kapoor Khan in a woman-centric flick.[/tps_footer]