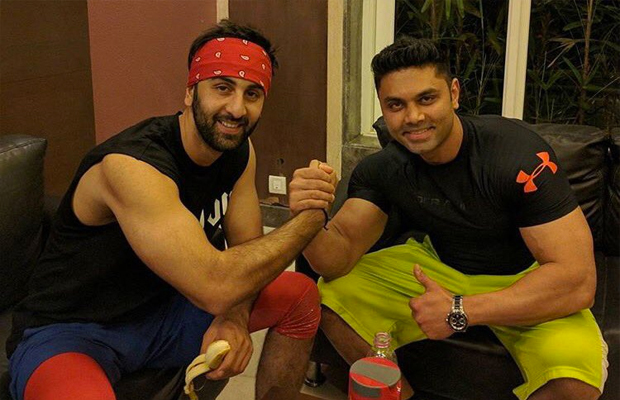 Ranbir Kapoor is gearing up for his next film helmed by Rajkumar Hirani, Sanjay Dutt biopic.

As a part of prepping up Ranbir Kapoor has gained more than 13 kgs of weight. This comprises of muscle and no fat to match up with the muscular physique of Sanjay Dutt.

Ranbir Kapoor will be seen portraying three phases of Sanjay Dutts life. He will be seen in three avatars. That is beefy body and then a lean look from 90’s. The third avatar will showcase his phase in dr*g rehab.

Ace fitness trainer Kunal Gir shared,”He has gained more than 13 kgs now which is all muscle and no fat. His waist line has gone down by an inch and he has been loosing fat while building up. Ranbir has an hour-and-a-half of intense work out sessions. Its a bug challenge bulking up Ranbir up like Sanjay. But the former is committed to-do whatever needs to be done. He wakes up at 3 am, has a protein shake and goes back to sleep”

There has been a change in Ranbir’s diet too now as Ranbir has started eating a lot of vegetables now days earlier he used to eat very less and his meals comprised mainly of meat earlier. Now Ranbir eats his food on time and has a proper balanced diet.

Kunal also added that he carries Haleem every other weekend as it is Ranbir‘s favorite food item, and if he doesn’t then Ranbir gets upset.